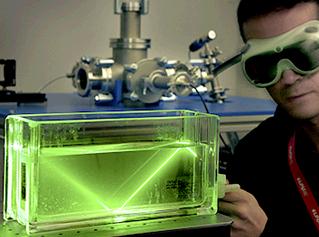 Iberdrola Ingenieria, the Pulsed Laser Centre (CLPU) and the University of Salamanca (USAL) have demonstrated the first results of the SIGMA research project, which is developing a new system for the separation and capture of CO2 from the exhaust gases at conventional electricity generation plants and industrial facilities.

The project is aimed at devising a system to reduce emissions by 100% in the facilities using laser radiation to ionise the pollutant gases, so that they shall be extracted through electrical and magnetic fields, and used as raw materials in other industries including fertiliser companies and canned food.

The researchers have launched the first prototype, which will use ultra-short, ultra-intense laser radiation to ionise the emissions, at the CLPU facility in Salamanca and have provided a full demonstration of the prototype’s functionality.

"The researchers have launched the first prototype, which will use ultra-short, ultra-intense laser radiation to ionise the emissions."

Iberdrola said that its participation in the SIGMA project is part of its investments in research, development and innovation (R&D&i) worth €10.5m during 2011 that is aimed at carrying out research in areas such as environment, offshore technologies, energy efficiency and nuclear fusion.

Backed with funding from the Ministry of Economy and Competitiveness, the SIGMA project, which was launched in 2011 with a budget of more than €2.5m, is an approximately four-year duration project being pursued under the auspices of the INNPACTO programme to promote research, development and innovation (R&D&i).

Image: Demonstration of the first results of the SIGMA research project. Photo: courtesy of Iberdrola.