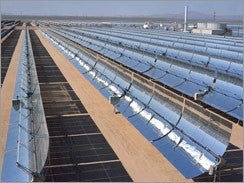 Megalim Solar Power, a joint venture of BrightSource Energy and Alstom, plans to begin construction on a 121MW concentrating solar power (CSP) plant in Israel in 2014.

The $1.1bn solar thermal plant, which is one of three solar projects selected under Israel’s Ashalim 250MW total solar tender, will be built in the Ramat Negev Regional Councils’ 3.15km2 site in the Negev Desert.

The plant, which is expected to be operational in 2016, will emit less gaseous and pollutant emissions and generate clean electricity, contributing to the Mediterranean Solar Plan and Israeli national target of generating 10% of the total electricity capacity from renewable energy sources by 2020.

Megalim Solar is seeking a €150m loan from the European Investment Bank (EIB) to finance the planned Ashalim CSP plant in Israel, while the EIB has listed the €575m project as ‘under appraisal’ since 27 May 2013.

View All
"The plant, which is expected to be operational in 2016, will emit less gaseous and pollutant emissions and generate clean electricity."

Selected through a formal international procedure, the promoters are required to procure 20% of its investment domestically, according to the Israeli law. The 250MW Ashalim project is claimed to the world’s fifth largest solar power station.

To be built on build, operate, transfer (BOT) basis, the project is comprised of three projects: two CSP projects and a PV power station. The promoters are required to finance and build the plants, operate them for 27 years and then transfer them to the state.

According to the environmental impact assessment (EIA) report for the Ashalim site project, which is likely to generate 2% of Israel’s electricity consumption, the capacity was divided into CSP plants between 80-110MW each and a PV plant with a capacity of 15MW, with the possibility to add 15MW.

Each of the CSP plants is estimated to require 4,500 dunam of land, while the space requirement for 15MW PV capacity is likely to be an area of 500 dunam, while another 500 dunam was allocated for the proposed expansion to add 15MW.