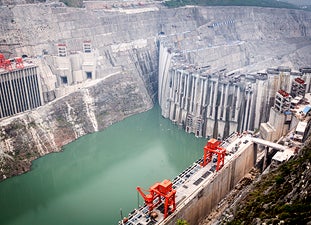 Siemens has completed construction of a high-voltage gas-insulated transmission line (GIL) at the Xiluodu hydropower plant, which is claimed to be China’s second largest hydro project.

The GIL project included the installation of seven three-pole systems, each with a length of 620m and a single-tube tube length of 12.5km, which is claimed to be the world’s longest GIL.

Built for the customer China Three Gorges Project, Siemens commissioned the first system in March 2013, three more systems in July 2013, and the final two in September 2013.

GIL, designed for a power capacity of 3,900MVA at a voltage of 550kV and a rated current of 4,500A, enables transmission of extra high voltage (EHV) and extra high currents (EHC) within restricted space and acts as a suitable alterative wherever overhead lines cannot be used.

The power generated at the hydro plant will initially travel from the turbines in the power plant cavern to the overhead transmission lines, a distance of approximately 460m and ultimately to the population centers in the eastern part of the country.

The power generated at the hydro plant will initially travel from the turbines in the power plant cavern to the overhead transmission lines, and ultimately to the population centers in the eastern part of the country."

Inserted vertically in four shafts to the right and left of the dam, the three-pole GIL systems will each transmit 3,900 MVA of that power safely and efficiently to the overhead power lines.

The non-flammable GIL, which was used instead of high-voltage power cables, can extend the application range to higher voltages and higher transmission power and eliminate any risk of fire, ensuring a better operational safety.

Other benefits of GIL include optimal values for electromagnetic compatibility, increased earthquake resistance, a leak-proof design due to welding style, among others, the company claims.

The GIL tubes are welded over their entire length using an innovative high-tech process that requires clean-room conditions, which increases operational reliability and ensures the GIL tube flexibility.

"This is also the first time technical figures such as 550 kilovolts of operating voltage and 3900 MVA transmission power per system have been involved.

"We’re proud that we completed this massive project in such a short time under complex installation conditions at the job site," said Schreiber.

Image: Looking upstream on the Jinsha Jiang River at the Xiloudu Dam, you can see two of the water entry openings. The dam filling with water is ongoing. Photo: courtesy of Siemens.