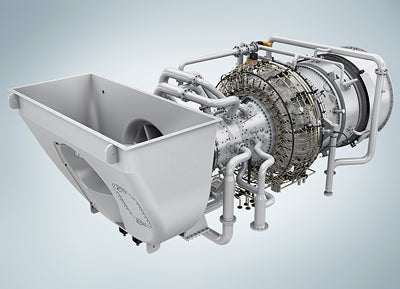 Under the contract, Siemens will supply ten turbines to Amata B.Grimm Power (ABP), six turbines to SSUT and PPTC and four turbines to IRPC Clean Power.

The contract, which was awarded under the third phase of the government’s programme to support small power producers, is worth more than €300m including installation, and commissioning will see the supply of turbines of 50.5MW each that will have a combined capacity of more than 1,000MW.

In addition to this, Siemens will also supply five industrial SST-400 steam turbines for ABP, as well as provide chiller coils for some contracted gas turbines to enable around 10MWe greater power plant output. Siemens will manufacture the 20 turbines at its plant in Finspong, Sweden.

The end-users will install these gas turbines in ten different plants located in industrial parks, with most of them being built within an approximately 200km radius of Bangkok, the capital city.

"The end-users will install these gas turbines in ten different plants located in industrial parks, with most of them being built within an approximately 200km radius of Bangkok."

Additionally, the high exhaust gas temperature of the SGT-800 teamed with its high efficiency, makes it suitable for cogeneration and combined cycle installations, including process industries and district heating schemes, Siemens claims.

The amount of support being provided by the programme depends on the amount of primary energy being saved by the plants, and the plants are required to supply at least 5% of thermal energy in the form of steam or hot water to the industrial consumers to qualify for the subsidy under the programme.

Toupin said: "Siemens already obtained orders in 2010 and 2011 for 20 industrial gas turbines from Thailand. Since that time, 18 of these turbines have already gone into commercial operation.

"All of these turbines were able to meet or even exceed the contractually promised values in terms of capacity and efficiency. This success was a decisive factor in the Thai small power producers opting once again for Siemens’ SGT-800 gas turbines."