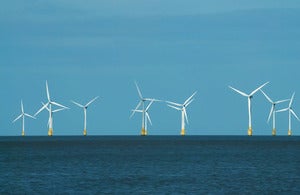 The UK Planning Inspectorate has agreed to examine Forewind’s application for the proposed 2.4GW Dogger Bank Creyke Beck offshore wind farm project, which is the first stage of the company’s offshore wind development with 13GW in the Dogger Bank Zone.

Special purpose companies Doggerbank Project 1 Bizco and Doggerbank Project 4 Bizco will develop the first and second projects, respectively, and will connect them to the existing Creyke Beck substation, near Cottingham in the East Riding of Yorkshire.

"The project is expected to generate 45.5TWh of clean electricity annually, enough power to supply 10% of the UK’s electricity requirements."

Previously known as the Dogger Bank offshore wind farm, the project will feature a total of around 600 turbines and is expected to generate 8TWh of clean power annually, which is enough to entirely power the Yorkshire and Humber region.

With around 2,000 wind turbine generators totaling around 13,000MW capacity, Forewind’s Zone 3, Round 3 offshore wind energy development in Dogger Bank Zone is claimed to be the largest wind power project in the world.

Once all the stages come online, the project is expected to generate 45.5TWh of clean electricity annually, which is enough power to supply 10% of the UK’s electricity requirements.

Duke Energy Merges With Progress Energy: Largest Power Firm Created in the US

Duke Energy and Progress Energy Merger: The Largest Nuclear Fleet in the US and its Future Nuclear Plans