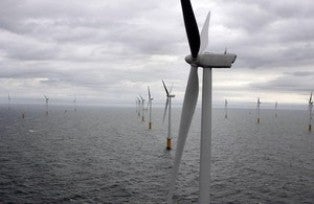 The UK installed 854MW of wind generation capacity in 2012, bringing the total British offshore wind capacity to 2.9GW, according to the European Wind Energy Association (EWEA).

During the 12 months, nine wind farms were fully connected to the National Grid, representing investments of around €3.4bn to €4.6bn.

"The offshore wind industry is continuing to attract investment and creating jobs."

The report also showed Europe installed 1,165MW in offshore wind capacity last year, with 293 turbines installed and connected to the grid, bringing the total of turbines to 1,662.

RenewableUK Offshore Renewables director Nick Medic said: "The offshore wind industry is continuing to attract investment and creating jobs. We anticipate that more than 47,000 people will be working in the offshore sector by 2021."

Meanwhile, Scottish Renewables has announced that offshore wind developers have so far injected £165m in the Scottish economy.

The investment figure represents all contracts awarded by developers with Scottish companies in advance of any permissions being awarded to their projects.

Image: The UK is the current leader in wind power generation. Photo: courtesy of Scottish Renewables.