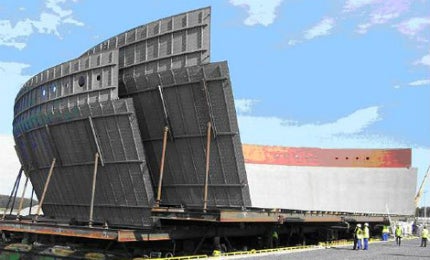 Construction of the Finnish Olkiluoto 3 1,600MWe nuclear power plant reached a milestone on 22 June 2010, after installation of the reactor pressure vessel in the reactor building. This marked the beginning of the installation activities of nuclear components, coinciding with the start-up testing of electro-mechanical systems.

Heavy components of the reactor, such as steam generators and pressurisers, were installed by February 2011.

The project was originally scheduled for a 2009 opening but has been delayed. The owner of the plant, Teollisuuden Voima Oyj (TVO), earlier in December 2011 announced the commissioning of the plant in 2014, resulting in a loss of more than $2.8bn. Areva blamed TVO for the delay in validation and completion of the technical document, which was required to be produced before the Finnish nuclear safety authority.

TVO further announced in February 2013 that the plant start up could possibly be realised only by 2016. TVO makes this announcement based on the construction status reports sent by the project suppliers, AREVA-Siemens Consortium. AREVA, on the other hand, plans to complete the project in time, calling for more active co-operation from TVO in order to obtain the final approval of the detailed I&C architecture.

“TVO further announced in February 2013 that the plant start up could possibly be realised only by 2016.”

The EPR (European Pressurised Reactor) is the direct descendant of Areva’s N4 and KONVOI reactors. The pressurised water in the primary system is used as a moderator to slow down the neutrons, allowing a nuclear reaction to occur in the core and transfer the heat generated during the reaction to the steam generators.

The EPR has four steam generators – one for each of the four heat removal loops – making up the primary system. Steam generators are heat exchangers. They receive heat from the nuclear reactor on their primary side, and deliver heat to the non-nuclear part of the facility on their secondary side.

There is a leak-tight separation between primary and secondary sides. The secondary heat produces steam to power the turbine which generates electricity.

The turbine building houses the equipment which transforms the steam produced into electricity: the turbine, the alternator and the transformer, which is connected to the grid. During a power blackout, diesel generators housed in two separate buildings supply electricity to the safety functions.

The major safety system consists of four sub-systems or ‘trains’. Each train is capable of performing the entire safety function independently. There is one train in each of the four safeguard buildings, separated from each other by the reactor building, to prevent simultaneous common-mode failure of the trains.

The control room is in one of the safeguard buildings, protected by the outer shell. The computerised control room allows operators full control over all parameters important for plant operation. Projected service life is 60 years, compared with a 40-year service life for other power reactors.

A consortium formed by Areva and Siemens signed the contract for the turnkey construction with TVO. Areva is supplying the nuclear island, the digital control system and the first fuel core, plus civil works. As leader of the consortium, Areva is coordinating the overall project, including functional and technical integration of the complete plant.

“Nuclear power is the largest source of energy in Finland, with total production of 2,700MW.”

Civil construction and erection work has already been subcontracted. A large part of the construction contract (47%) was awarded to companies in Finland directly, but companies from abroad often engage Finnish sub-suppliers too. TVO is responsible for the overall project management and licensing process with the Finnish Safety Authority STUK. The installation of the power house for the nuclear power plant has been contracted to Heitkamp.

KSB is providing more than 20 pumps and 1,000 low, medium and high-pressure valves for the project. Roctest is supplying its Telemac / Smartec monitoring system for the plant.

The supply of Pedestal Crane PC9600 for the lifting of dome and gantry cranes at the project site has been assigned to Sarens Group.

In October 2006, the EC launched a formal investigation on the French Government’s €570m ($716m) loan guarantee for Olkiluoto 3, asking whether it broke EU rules on state aid. In December 2006, Areva reportedly took a charge of €500m ($666m) for extra costs, because work on the reactor was 18 months behind schedule. Areva remarked in response that it was the first reactor of its kind.

Nuclear power is the largest source of energy in Finland, with total production of 2,700MW, which accounted for 29% of the energy produced in 2009.

As of 2010, apart from Olkiluoto 3, three more plants are being assessed – Olkiluoto 4, Loviisa 3 and Fennovoima. The proposed reactors are expected to add 3,500MW to 6,100MW to the country. The country’s internal natural resources are limited, while the consumption per inhabitant is high (15,600kWh), and grew at an annual rate of more than seven percent in 2010, compared with the first quarter of the previous year. Nearly 70% of the energy used must be imported. This major constraint threatens the country’s energy independence and economic balance.

Finland used 84.9 billion kWh of electricity in 2005, and demand has been growing faster than that in the other Nordic countries. In the last ten years, consumption has increased by an average of 2.6% a year, and is expected to reach 103.3TWh in 2020.

Industry is the largest consumer of electricity because Finland has a large energy-intensive industry. Increased production raised the industrial power demand by 3.8%. In 2005, Finnish industries used about 52% of all electricity.

TVO submitted an environmental impact study for unit four to the Ministry of Employment and Economy on 14 February 2008. It received permission from the Finnish Government for the construction of the fourth unit on 21 April 2010 and approval of the project by Finland’s Parliament in July 2010. The fourth unit is expected to produce 1,000 to 1,800MWe upon completion.