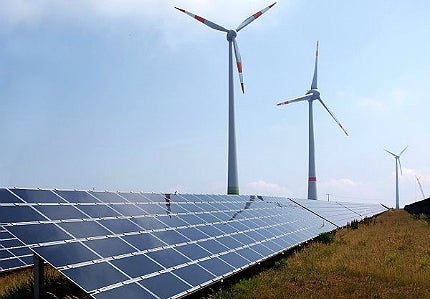 The German Government has proposed aggressively expanding its renewable energy use with the purpose of making green energy 60% of the country’s final energy consumption by 2050. It also plans to follow the Renewable Energy Sources Act 2012 (Erneuerbare Energien Gesetz – EEG), which expects the total share of renewable energy electricity consumption to increase by a minimum of 35% by 2020, 50% of gross electricity consumption by 2030, 65% by 2040 and 80% by 2050.

The aim of the EEG law has been to encourage the development of sustainable energy, towards achieving the goal of protecting the climate and the environment in order to decrease energy supply costs, conserve fossil fuels and promote continued technological developments that involve generating electricity from green energy sources.

However, it reveals that the country’s growing renewable energy sector together with rising electricity costs will require its government to create additional policies to support the country’s ambitious energy shift plan or Energiewende.

Translated as energy transition, the Energiewende was established by the German Parliament in June 2011 outlining its plan to gradually end the country’s nuclear energy dependence and close the remaining nuclear power plants by the end of 2022. Their energy system will essentially go from a fossil-nuclear energy structure to a renewable technology scheme.

The question is how will this transition be accomplished while keeping general energy costs low and ensuring that consumers do not end up paying more for their electricity? Furthermore, how will this scheme maintain the reliability of a new renewable energy-focused system?

The prospect of German renewable energy is not so straightforward

According to an executive director at the IEA the "rapid, uncontrolled deployment of PV has become a major policy concern and represents a significant cost for consumers."

The issue is that German consumers have taken up the costs of the Energiewende and as a result disagreement over the social and economic impacts of the EEG has become more vocal, as the stake of renewable energy has increased along with mounting electricity prices.

The main hurdles towards achieving the transition to low-carbon energy usage involved the public approving the shift in addition to ensuring that retail electricity prices stay affordable.

"The fact that German electricity prices are among the highest in Europe, despite relatively low wholesale prices, must serve as a warning signal," the executive director emphasised. They maintained that as a result of these price levels, the "German Government should maintain its policy course based on a predictable and stable regulatory framework while actively seeking means to reduce the costs."

According to the Energy Policies of IEA Countries – Germany 2013 Review, renewable energy contributed about 36.1 million tonnes of oil equivalent (Mtoe) or 11.3% of Total Primary Energy Supply (TPES) in 2011. Wind and solar are expected to increase at a significant rate in the next 20 years.

As a result, the executive director suggests that large investments are necessary for Germany to keep pace with the rapid growth of solar PV and wind power. They insist that there is a need to invest in new network infrastructure, improve the EEG, particularly when it comes to costs, and certify the stability of electricity supply as well as the impact of the Energiewende on Europe.

Macqurie’s senior analyst, Robert Schramm-Fuchs, added his findings to the group’s equities research report, which revealed that the wholesale power market "is structurally broken." It predicts that the Bundestag will expand its renewable energy capacity, by including 4.5GW of solar capacity additions and 1.75GW of new wind energy systems for 2013. The majority of the new capacity systems are expected to be up and running by the latter part of 2014.

"Large investments are necessary for Germany to keep pace with the rapid growth of solar PV and wind power."

Schramm-Fuchs believes there is a possibility of a "re-distribution of the increased levies and surcharges over all stakeholders including the utilities instead of being paid for exclusively through end-user bills." He emphasised that "industrials cannot pay more, and smaller commercial and residential users are becoming increasingly likely to drop out of the system and cover larger portions of their demand through solar and micro-CHPs."

The issue surrounding the German power market, with regard to renewables, is that these "energy installations receive fixed feed-in tariffs regardless of the wholesale power price at the time of generation." One solution, he believes, is to cut tariff payments when wholesale spot power prices are negative.

Alternatively, the IEA report finds that the country’s energy policy is based on "long-term investment decisions and the framework conditions in Germany for a policy consensus in favour of large-scale deployment of renewables have never been better." The IEA executive director added that the Bundestag "should maintain its policy course based on a predictable and stable regulatory framework while actively seeking means to reduce the costs."

The executive director added immediate "changes can undermine investor confidence and will drive up costs in the long term: Any form of retroactive tariff cuts – even if applied for only a short period – must be avoided." She suggests that the country needs "to develop a mechanism to ensure that costs can be distributed more equitably. What has worked in the past may not be a blueprint for the future."

The IEA report reveals further suggestions on how the German Government in managing the future costs of renewable energy capacity by using cost-effective market-based methods, which will certify the growth of renewable electricity generation, bring about new investments and expand energy networks. One of the foremost involves creating a process by which the costs of the "Energiewende are minimised and allocated fairly and equitably across customer groups, including households and small businesses."

Another proposal involves incorporating a "timely and cost-efficient investment in transmission and distribution networks and a regulatory system" which leads to improved financial incentives and brings about increased funding.

Lastly, the IEA believes Germany should look at cost-effective electricity storage and examine the suitability of their renewable energy capacity markets in order to assist the transition to a post-nuclear power system.

"Expanding transmission and distribution networks in Germany is considered a priority in order to transfer energy supply."

Currently, according to the IEA, the transmission infrastructure that presently carries power from northern Germany to the southern region is very congested and may get worse over time.

Modifications to the German Energy Act (EnWG) include the 2012 Electricity Grid Development Plan (NEP 2012), which incorporates the improvement of approximately 2,900km of lines and the creation of 2,800km of new power lines. The expected cost for this work will be around EUR 20 billion to EUR 30 billion in the next ten years. Because renewable electricity is generated via a distribution system rather than a transmission system, sufficient investments are needed to upgrade the country’s 870 distribution systems.

This kind of project, according to the German Energy Agency, is expected to cost between EUR 27.5 billion and EUR 42.5 billion.

At this point, greater focus has centred on developing the transmission system, but because a larger share of investment will surround distribution networks, the focus of Germany’s future energy ambitions should remain on improving distribution.

Gotland: the epicentre of the EU’s smart grid project

The island of Gotland, approximately 90km east of mainland Sweden, has become the epicentre of a three-year smart grid trial aimed at meeting the EU’s climate change target of reducing carbon emissions by 20% before 2020.

Offshore wind has the potential to become a major source of energy, but can Europe’s infrastructure support this offshore wind boom?

Connecting Operations, Maintenance, and Engineering Stakeholders throughout the Asset Lifecycle