In a 2011 report published by market researcher Business Monitor International, it appeared that Japan’s troubles resulting from the Fukushima disaster had done nothing to halt South Korea’s plans for nuclear, a resource it already relies on for 30% of it electricity needs.

The ‘South Korea Power Report Q2 2012’ showed that the country aimed to build a number of new reactors, increase its annual growth of nuclear generation by five percent and cut the level of emissions from its coal, oil and gas sites.

The $2.5bn 1,600MW Yonghungdo plant has been completed on the Yonghungdo island near Inchon, South Korea.

But, in an unexpected turn of events the Korea Electric Power Corp, the country’s electricity monopoly, has said it may increase coal imports to replace nuclear altogether.

The news follows the shutdown of the Kori-1 reactor in Busan on March 13, two days after the first anniversary of Fukushima and five weeks after a 12-minute blackout occurred at the plant, an incident the head of Korea Hydro and Nuclear Power, Jong-shin Kim, reportedly resigned over.

Concerns about nuclear safety has also led local environmental groups to campaign against government plans to extend the life of Wolsong-1 in North Gyeongsang province and other older reactors in the country. 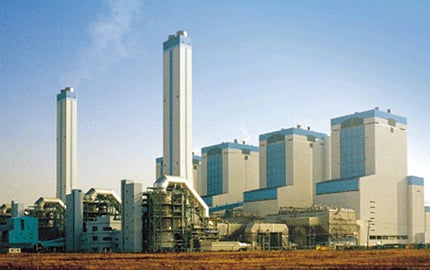 Around 65% of the South Korea’s electricity needs were met by coal in 2011, and the bulk of power was generated at sites such as the Dangjin Coal-Fired Power Plant.

In January 2012, South Korea coal imports registered at 11.47 million tons, 2.5% higher than the previous month and around 4.6% higher than January 2011, according to figures from ICAP Shipping.

South Korea is already the third-largest importer of thermal coal, but further increases in the trading of this resource could see the country soon catch up with Japan and China.

Around 65% of the South Korea’s electricity needs were met by coal in 2011, and the bulk of power was generated at sites such as the Dangjin Coal-Fired Power Plant, which has been in operation since 2000, the $2.5bn 1,600MW Yonghungdo plant located near the city of Inchon, and Korea Electric Power Corp’s largest coal power facility, the Hadong plant, which has six 500MW units.
Other coal-fired power stations in South Korea include the Honam plant, which has been in operation since 1973, and the 3,240-MW Samcheonpo thermal power plant.

There are plans boost the nation’s power capacity by adding more power plants, but with government targets to reduce energy intensity by 46% by 2030 under its Basic National Energy Plan, will the use of coal help or hinder this aim?

Energy consumption in South Korea is more than twice as high as the world average (around five tons of oil equivalent per capita in 2010), according to the South Korea Energy Efficiency report, and electricity prices in the country only cover 87% of the cost of generating electricity.

But, coal could help lower the cost of energy, said Osamu Fujisawa, an independent energy economist in Tokyo. “If you’re trying to increase summer power generation, coal is the best in terms of cost,” Fujisawa told Bloomberg.

Coal prices reduced dramatically from $123 per ton in February to $103 a ton in April 2012, despite an increase in demand from India and China. So, coal power could help South Korea’s economy become more energy efficient, but what about its impact on the environment?

In November 2009, South Korea set a target to reduce its carbon emissions by 30% from the predicted level by 2020, but with plans to fuel power with more imported coal, this target could be drastically underachieved.

Using cheap coal to generate power while reducing the release of harmful greenhouse gases into the atmosphere is a major challenge, but one South Korean company may have found the ultimate solution.

In July 2011, global engineering and construction firm Foster Wheeler announced that Hyundai E&C, the project’s main contractor, had given the firm the go ahead to design and supply four 500MW CFB boilers, which will provide steam to two 1100MW Toshiba turbines at the utility.

FW’s CFB boilers are scheduled for commercial operations in June 2014, after which four more of these units, plus another two steam turbines, will be added to the project.

The seawater-cooled plant is being built across a 2.6 square metre area using rock excavated from the seashore, and will also feature a covered coal yard, and a carbon dioxide research centre, which will explore carbon capture and storage technologies.

Coal will be transported to the power plant underground via culvert conveyors, while ash generated at the facility will be exported for use in aggregates and land reclamation.

The $2.5bn 1,600MW Yonghungdo plant has been completed on the Yonghungdo island near Inchon, South Korea. The plant is owned and operated by Korean Electric Power Co (KEPCO).