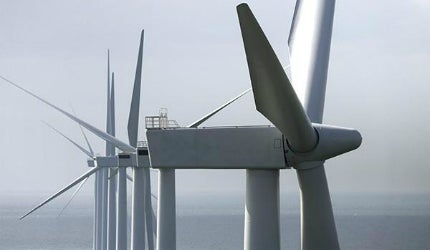 The €2bn ($2.43bn) project is owned and developed by a joint venture of RWE Innogy (60%), Stadtwerke München (30%) and Siemens (10%). The project received environment approval from the UK Department of Energy and Climate Change (DECC) on 3 December 2008. Its construction started in January 2012 and was completed in approximately three years. The wind farm was officially inaugurated in June 2015.

It will produce 1,950GWh of clean energy a year, which will be enough to power 400,000 households, equivalent to cutting 1.7 million tonnes of CO2 emissions a year.

Unexploded bombs from the World War II times were found in the seabed near the site of the wind farm. RWE disposed the three unexploded ordnance devices with the help of 6 Alpha Associates.

“The offshore facility will produce 1,950GWh of clean energy a year, which will be sufficient to power 400,000 households.”

The wind farm is situated in water depths ranging from 15m to 30m. It uses 160 Siemens SWT-3.6-107 wind turbines rated at 3.6MW each. The turbines are supported by monopile foundations, with each one consisting of a 5m diameter steel tube measuring 50m to 70m in length, and weighing from 500t to 700t each.

The installation of turbines started in the fourth quarter of 2011, with offshore cable installation starting in 2012. The first turbine was installed in May 2013 and 107 turbines were installed by the end of 2013.

“The power is transferred further to a new onshore substation located at St Asaph through 12km onshore export cables.”

Output from the wind facility is transmitted to offshore substations via subsea cables, then to an onshore substation through export cables, and finally to the National Grid through onshore interconnection cables.

The wind farm generated its first power in August 2013, which was then exported to the St Asaph substation.

Siemens supplied, installed and maintains the wind turbines, and also provided electrical connection to the grid under an electrical systems contract worth €1.2bn ($1.45bn).

RWE awarded a contract to A2SEA for supplying its jack-up vessels, Sea Jack and Sea Worker to install the wind turbines, generators and blades.

The onshore 400kV transformer substation at St Asaph was constructed by Jones Bros. Construction started in November 2009 and was completed by 2013.

Scotland-based Burntisland Fabrications (BiFab) signed a £12m ($19m) contract to design and manufacture the foundation structures of the substations.

Prysmian Cables and Systems supplied 134km of high-voltage onshore cables for the wind farm, under a £15m contract. The cables are attached to the offshore network at Pensarn and routed to the St Asaph substation via underground.

CT Offshore was awarded the contract for free-laying, installation and burial for 63 cables of the 161 inter-array cables.

The consortium of Bladt Industries and EEW Special Pipe Construction was awarded the contract for manufacturing the wind turbine foundations.

The contract for providing drilling and pile installation services for the foundations was awarded to LDD.