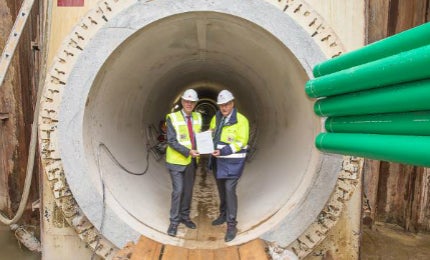 Köln Niehl 3 is a natural-gas fired combined heat and power (CHP) plant constructed adjacent to the existing Köln-Niehl 2 power plant in Niehl harbour, Cologne, Germany. The new plant was connected to the national grid in September 2015, and commenced commercial operation in September 2016.

The project was developed by RheinEnergie, with Alstom being the main contractor. The latter has also agreed to provide a 15-year maintenance agreement for the plant.

The new power plant generates 453MW of electricity, enough to meet the needs of up to one million households, and approximately 265MW of thermal heat, enough for approximately 30,000 households.

“The plant is one of the world’s most well-optimised co-generation power plants.”

The plant possesses fuel efficiency of approximately 85%, and electrical efficiency of 60%, making it one of the world’s most well-optimised co-generation power plants. It also helps offset 500,000t of CO2 emissions a year.

The overall investment in the project is estimated to be €350m ($393m). The project received a €202m ($227m) loan from Helaba, Commerzbank and NRW.BANK in March 2014. The former served as the mandated lead arranger, while Clifford Chance was the developer’s advisor.

The GE Hybrid Power Plant is a pilot project that comprises photovoltaic, combined heat and power (CHP), and energy storage technologies to produce and manage the power output.

A certain proportion of the recovered steam is heated via a heat exchanger connected to the heating water circuit. The water then flows directly into the underground district, heating pipelines to provide warmth for the households. The cooled water returns to the system to be reheated.

Connection to the German power grid

The electrical output from the CHP plant is conveyed to the high-voltage grid in Opladen, operated by Amprion, via a 16km-long, 380kV cable. The 13cm-diameter cable is placed underground for a stretch of 9km, and is an overhead power line for a 7km stretch.

“The electrical output from the CHP plant is conveyed to the high-voltage grid in Opladen.”

A substation integrating a transformer with a power output of 560MVA, 410/21kV, is placed at the project site. A separate switchboard from the substation conveys electricity to the Cologne distribution network, operated by RheinEnergie, via a 5km-long, 110kV underground cable.

The transportation, shipment and installation of the power plant’s main components were performed by Wagenborg. The civil and structural design works for the project were performed by Incico in collaboration with ECM.

Flenco supplied an auxiliary contact block to lubricate the GT26 gas turbine and related steam turbine, whereas the seamless tubes and pipes for the boiler were supplied by Erne Fittings.

Young & Franklin (Y&F) is a premier design and manufacturing...