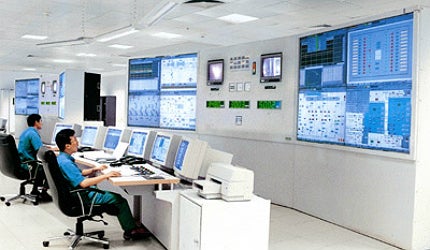 Electricity company RWE Power’s lignite-fired power station in Neurath was installed with two new 1,100MW blocks in 2011. The station is located in the Lower Rhine brown coal mining area near Grevenbroich, Germany, and is the world’s largest power plant fired by lignite (brown coal). With the addition of two new units, the plant has an efficiency of more than 43%.

The Neurath plant is also known as the BoA power plant. RWE Power started construction work on the plant in January 2006. The new units cost €2.2bn ($2.8bn), making the project one of Germany’s largest investment schemes.

RWE plans to shut down 12, 150MW units at the several sites. By December 2012, all 16 of the 150MW units in the Rhineland lignite mining region are expected to be shut down.

The two units are located near the existing power plants at Neurath and cover an area of up to 37ha. The units are named as F and G, and are partially connected to the supply and disposal facilities of the existing Neurath power plants. The two cooling structures are 170m tall.

The power plant gets its lignite supplies from a coal yard in the shape of a subterranean slot-bottom bin built within the premises to store lignite. RWE uses its own north-south rail line to deliver raw lignite to the coal yard from where conveyor belts transport lignite to the day bins in the boiler houses.

“The Neurath plant is also known as the BoA power plant. RWE Power started construction work on the plant in January 2006. The new units cost €2.2bn ($2.8bn), making the project one of Germany’s largest investment schemes.”

Babcock-Hitachi Europe GmbH (BHE) the consortium leader, supplied both the steam generators of the power plant. The order for the consortium was worth around €660m, with roughly half falling to BHE and associated companies. The units are the world’s largest steam generators with the highest steam mass flow, super-critical steam pressure and the highest-ever steam temperatures for brown coal.

Alstom won a €450m contract to build the two units (BoA two and three), and carry out the overall power plant engineering. It also supplied, erected and commissioned two steam turbine islands including condensers and, in the consortium, delivered the two steam generators.

The Alstom-made steam turbines are the largest in fossil power plant construction. They use the most modern generation of blading with flow-optimised three-dimensional blades and the longest last-stage blades so far available.

Along with sheer size of the steam generators, the supercritical steam parameters acted as a particular challenge for the engineering of the individual components and – due to the overall height – for the erection of the two units.

GEA Group’s Energy Technology division won the contract to build the two cooling towers for Neurath. The order was worth around €50m and is one of the largest contracts yet won by GEA’s Energy Technology division. The cooling towers use wet cooling, as the natural draft created in the tower cools the water, which is fed back into the cooling circuit.

Siemens Power Generation (PG) supplied the control system for both blocks. The company also delivered the transformers for the plant and the drive turbines for the feed water pumps. Siemens’ order exceeded €90m, and is the first worldwide fully web-based fourth-generation control system.

Bilfinger Berger Power Services supplied a high-pressure piping system through subsidiary Essener Hochdruckrohrleitungsbau (EHR). This order was worth about €170m, of which €100m went to EHR.

The company also prefabricated and installed 5,000t of pipes with a total length of more than 20km. New composite materials measured up to 100mm thick to cope with the ever-increasing temperatures and pressures in modern power plants. This placed tremendous demands on, for example, welding.

The investment comes after many years of stagnation in power plant investment in Germany. An estimated 50GW of generating capacity needs replacement by 2020. The station is part of a programme of 24 new power station projects in Germany with total output of almost 20GW being built or planned at the start of 2006.

Lignite is a heavy polluter, and Neurath uses conventional coal firing, rather than the cleaner and more efficient coal gasification with carbon dioxide scrubbing.

In December 2005, 30 Greenpeace activists climbed onto a cooling tower at the site.

They were protesting against climate change contribution by the electricity company, which they claimed was responsible for the biggest CO2 discharge in Europe.

A banner showed the words ‘CO2 Kills’ and the protest was timed to coincide with the Montreal climate talks.

The organisation wanted investments to be redirected into clean energy.