Aerial view of Solnova units 1, 3 and 4. PS10 and PS20 solar power plants are also seen in the background.
The mirrors used at Solnova solar power plant are supplied by Rioglass.
Bilfinger Berger is responsible for the insulation of pipes and plant components.
The ASTRO parabolic trough technology features long rows of curved mirrors which can be rotated according to the direction of the sun. 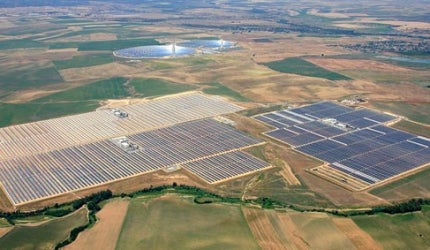 The Solnova power station will be the world’s largest concentrating solar power plant with an installed capacity of 250MW upon completion. The plant is being built in five stages of 50MW each. Its groundbreaking ceremony was held in 2007. The units 1, 3 and 4 became operational in 2010, while units 2 and 5 are in development stage.

The three operational units are also provided with gas as an alternative source for generating power.

“The Solnova power station will be the world’s largest concentrating solar power plant with an installed capacity of 250MW upon completion.”

Abengoa Solar is the owner, constructor and operator of Solnova Solar Power Station.

The larger Solúcar Complex aims to serve 153,000 households and cut 185,000t of carbon dioxide emissions annually, with a total installed capacity of 300MW. It will be spread over 2,471 acres (1,000ha) of land and will cost an estimated €1.2bn ($1.5bn). The photovoltaic (PV) plants that make up the complex include PS10, PS20, Solnova, Sevilla PV and Casaquemada PV.

A futuristic-looking 11MW solar tower has been completed near Seville, Spain as part of a 300MW solar power project.

Unit 1 was the first to be opened for commercial operations, in early May 2010. It was followed by the opening of Unit 3 in the same month and Unit 4 in August 2010.

The technology involves long rows of curved heliostat mirrors which can be rotated towards the direction of the sun. The mirrors reflect the sunlight which is concentrated onto a pipe containing a fluid (synthetic oil). The fluid heats up to 400°C temperature by absorbing the solar radiation. The hot fluid is transferred via pipes to heat water vapour in a turbine-generator where electricity is produced.

The pipes are insulated to minimise the loss of energy during the transfer of the thermal oil and steam. This is achieved by covering the pipes in glass wool before coating them with aluminium.

The estimated construction cost for units 1 and 3 came to around €500m. It was 50% financed by the European Investment Bank.

The construction contract of Solnova units 1 and 3 was awarded to Abener, which appointed Teyma as the subcontractor for the civil works. Solnova 4 was constructed jointly by Abener and Teyma. All the contracts were awarded on a turnkey basis.