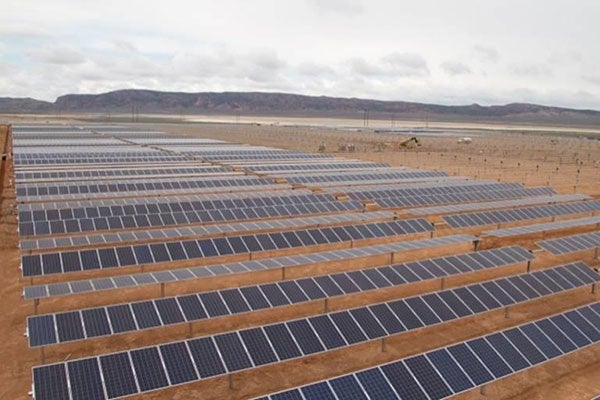 The facility is being constructed on 630 acres of privately-owned land which is an excellent location for solar irradiation. Construction on the plant began in January 2015 and commissioning is scheduled for December 2015.

With a capacity of 104MW, the plant is estimated to generate approximately 210m kWh of electricity a year that will be sufficient for supplying energy to 18,500 homes. The project is anticipated to create approximately 300 direct jobs and 500 indirect jobs with 85% of the labour force sourced locally from Utah.

According to US Environmental Protection Agency’s estimates, the renewable power generated by the Utah Red Hills will be sufficient to offset 145,000t of carbon dioxide emissions a year.

The ground-mounted photovoltaic solar facility will consist of roughly 340,000 photovoltaic (PV) modules on a single axis tracking system that will be connected to an existing transmission line.

Fences and barbed wires have been erected around the plant site that includes long rows of 5ft-tall aluminium posts fixed to support huge solar panels. The panels will be fixed 6ft above the ground and rotate simultaneously, tracking the Sun.

Advanced technology and computer controls will be used to maintain the alignment of the panels east to west throughout the day for capturing maximum sunlight. Controls will also allow the panels to be turned 90° up and down to prevent the accumulation of snow and water.

Installation of 30,000 solar panels has been completed as of October 2015, while the remaining panels are expected to be installed by December.

The plant will be equipped with DuraTrack HZ solar tracking system and 80 AE 1000N inverters from Advanced Energy Industries. The tracking system includes a single-bolt per module clamp and zero scheduled maintenance among its features. It also eliminates the need for active winds stow and uninterrupted power source by featuring passive wind management system.

Under the federal Public Utility Regulatory Policies Act, electricity generated at the renewable park will be supplied to the grid. A 20-year power purchase agreement (PPA) was signed with PacifiCorp’s Rocky Mountain Power for the same.

The project will also be eligible for US solar investment tax credit of 30%.

Contractors involved with the renewable park in Utah

“Advanced technology and computer controls will be used to maintain the alignment of the panels east to west throughout the day for capturing maximum sunlight.”

Scatec Solar will be the asset manager for the plant in collaboration with Swinerton Renewable Energy through the operations and maintenance service contract.

Array Technologies, a company based in Albuquerque, was contracted by Swinerton Renewable Energy for providing its DuraTrack™ HZ single-axis tracking system.

JinkoSolar has been selected by Swinerton Renewable Energy for providing its utility-scale, high-efficiency polycrystalline 72-cell panels for the Utah Red Hills renewable park.

Ballard Spahr, a legal firm, advised and represented Scatec Solar in obtaining the finances for the construction of the project. It also provided assistance in obtaining local, state and federal permits and approvals, and negotiating the 20-year power purchase agreement with Rocky Mountain Power.