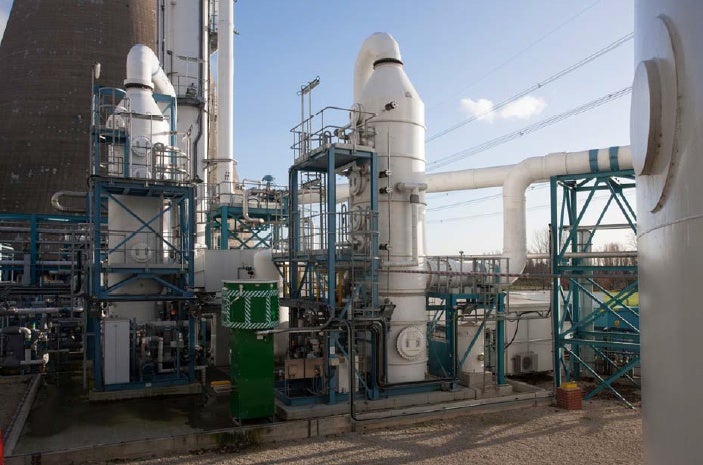 ERG Air Pollution Control Ltd, based in Horsham, UK, has installed a £750,000 flue-gas desulphurisation (FGD) unit at the Ferrybridge power station, as part of a carbon capture pilot project.

The ERG system acts as a final flue-gas polishing stage to reduce SO2 and particulate concentrations to the required levels, before the flue gas is passed to a downstream post-combustion carbon capture unit, which will remove 100 tonnes of carbon a day from the flue gases emitted by the Ferrybridge coal-fired power station.

The unit was supplied to Doosan Power Systems, appointed by Ferrybridge owner Scottish and Southern Energy (SSE), for the engineering design and operation of the carbon capture plant at the Yorkshire power station.

The main components of the ERG system are a two-stage polishing tray scrubber and a direct contact packed-tower cooler. ERG has also supplied additional equipment, such as recirculation pumps, a fan, scrubbing liquor storage tanks, and ancillary instrumentation and control equipment.

The unit, which is scheduled to be operational in 2011, will treat about 30,000m³/hr of flue gas, and will remove 80% to 90% of the SO2 and particulates present in the flue gas. This will condition it for the downstream carbon capture process, while the scrubber and the cooler are 9m tall and 2m in diameter and are constructed from GRP / polypropylene to ERG’s specification.

The completion of this project further consolidates ERG’s position as a leader in the design and supply of industrial air pollution control systems for the process industries.

Other major industrial projects that ERG has completed in the last year include a methane conditioning plant for the world largest fertiliser production site in Qatar, a hydrochloric acid fume scrubber for a petrochemicals refinery in Kazakhstan, a silicon tetrafluoride scrubber for phosphate fertiliser production in Egypt, a solvent recovery scrubber for a synthetic textiles manufacturer, and treatment plants for cleaning gases used in optical fibres and electronics both in South Korea and the UK.

UK based ERG (Air Pollution Control) Ltd is delighted to announce the addition of thermal...