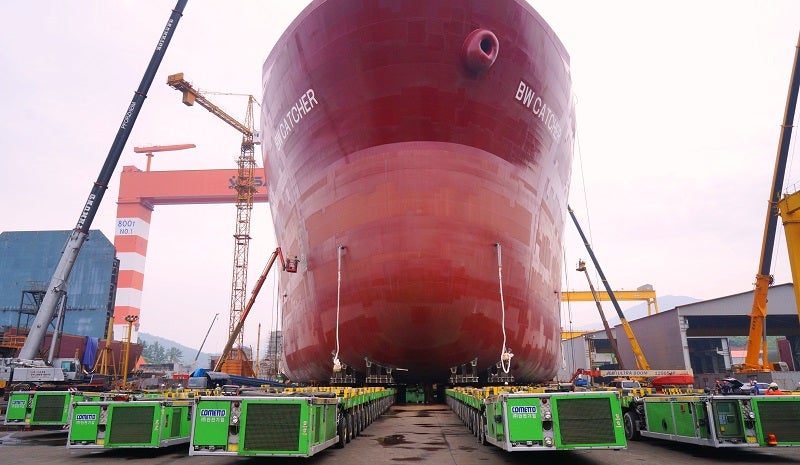 From 15 to 22 June, the first ever attempt of transporting a gigantic ship block (approximately 14,750t) in South Korea has been carried out at Goseong using a fleet of Cometto MSPE EVO2.

The enormous ship block was manufactured by Samkang MNT for a Japanese client (IHI-B/W CATCHER FPSO FTB TRANSPORT) and was delivered to Singapore. KCTC have won the deal for the complete transport project from the Japanese client and have subcontracted it to Cometto’s Korean customers Anjeon, Dae Myung and Global. All of them are most valuable customer of Cometto, and have their fleets entirely based on the highest level of technology and capacity available on the market (MSPE Evo2 – 60t/axle line).

Each company contributed with the same number of axle lines, making available 108 axle lines respectively, totalling 54 units of Cometto MSPE EVO2 6/4/2430 six axles transporters (324 axles) driven by 12 power pack units (335kW each), putting in operation an impressive total gross weight technical capacity of 19,440t. The total gross weight of the transport, including MSPE and support saddles, was approximately 16,340t, so the total axle gross weight was 50.4t/axle line. This granted a wide safety margin considering the total cargo weight and allowed the use of a limited number of axles compared to other solutions.

The movement consisted in loading the block on a barge for the shipment by sea to the final assembly site. The project has received wide attention from the shipbuilding industry because of its significance, showing the excellent performance that only Cometto MSPE EVO2 transporters can deliver. Cometto personnel supported this venture with the presence during the operations.

The highest payloads are achieved with tubeless tires, with clear advantages in terms of durability and ground aggression, avoiding the disadvantages of filled tires. Main features of EVO2 model are outstanding frame capacity which grants high strength, air-inflated tubeless tyres, dual link suspension, and compatibility with all the previous Cometto MSPEs.

The wide choice of payloads and layouts is a winning factor when the full interchangeability among all models is combined with the complete range of Power Packs designed for the system.

During the last BAUMA in April 2016, Cometto launched a new series of modular self-propelled transporter with electronic steering (MSPE Evo3) providing an increased technical axle load capacity (70t), confirming once again to be the leader in performance and quality.