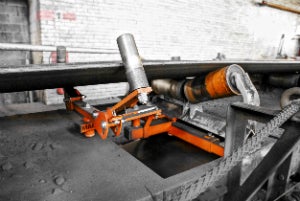 A global leader in bulk material handling solutions offers a family of responsive conveyor belt tracking systems that mitigate misalignment, rather than correcting it after the fact, even on reversing belts, to promote conveyor efficiency and safety.

A mistracking belt can contact the mainframe, seriously damaging both the belt and the structure, resulting in excessive spillage and even creating a potential fire hazard.

Utilising innovative multiple-pivot, torque-multiplying technology, the Martin® Tracker™ detects slight misalignments initiated by unbalanced loads and fouled rollers, using the force of the belt to immediately adjust its position and realign the path.

Rollers attached to the end of a sensing arm assembly ride both sides of the belt edge, detecting even slight variations in the belt path. Employing the force of the wandering belt, the arms automatically position a steering idler in the opposite direction of the misalignment.

Transferring the motion to the steering idler through a unique parallel linkage requires less force to initiate the correction, so fine-tuning of the path can be continuous, active and precise.

According to Dan Marshall, Product Engineer for Martin Engineering, "The biggest issue from a mistracking belt is spillage. If the belt is out of place, it’s not handling the load properly, and that will cause material to leave the belt. The build-up can be extremely rapid, especially from a high-speed conveyor, which drives up expenses due to wasted material and added cleanup. It also introduces the inherent risk which is always present when people are working around a moving conveyor," he added.

"The other big issue is having an instantaneously responsive tracking system, because a misaligned belt can quickly drift over into the conveyor frame and begin abrading the belt and the structure," Marshall continued. "If this isn’t caught right away, great lengths of valuable belting can be destroyed, and the structural steel itself can be damaged. In some cases, this has caused fires or compromised the integrity of the structure."

The multi-pivot design of the Martin system corrects many of the problems exhibited by current trainer systems on the market such as belt switches, vertical guides, v-idlers, crowned pulleys and sensing-roll trainers. Some correction systems have a tendency to overcompensate, requiring a safety tether or lead line to catch the device when the force of the misalignment detaches the unit from the mainframe.

Many of these systems correct mistracking after it has occurred, rather than constantly working to prevent it. By continuously mitigating tracking issues rather than reacting to them, the risk of failure is significantly reduced.

Utilizing a troughed idler support system on the carrying side of the conveyor to retain the proper angle and keep the load centered, the Belt Tracker Upper Unit employs guide rolls that are set one-quarter inch (6mm) from the belt for high precision when making opposing adjustments to the idlers.

Typically positioned shortly after the loading zone and just before the discharge pulley, extra trackers can be placed along the belt path, depending on the length of the conveyor and the tendency for cargo to shift. Belt Tracker Lower Units are hung from the mainframe under the return belt every 70ft to 150ft (21m to 50m) and use a single flat rubber idler to bring the belt back into alignment.

Upper and lower trackers are available in three models: standard-duty, heavy-duty (HD) and extra heavy-duty (XHD). The standard-duty model is designed for typical industrial material handling conditions, and can accommodate belt thicknesses of .625in (16mm) and under, widths from 24in to 54in (500-1600 mm) and speeds up to 700ft per minute (3.5mps).

Engineered to withstand the stress associated with wider, thicker belts moving at higher speeds and carrying heavier loads, the Tracker HD serves belts as thick as 1.125in (28.5mm), widths of 36im to 72in (800-2000mm), and traveling as fast as 800FPM (4mps). The Tracker XHD handles all other belt speeds and thicknesses exceeding those specifications for belts up to 108 inches (2700 mm) in width.

Reversing belts are a particularly difficult issue for belt tracking. "Reversing belts have some unique issues, because what works for conventional belt-training devices to centralize a belt’s path when it runs in one direction, will have the opposite effect when the belt direction is reversed," Marshall pointed out. "A pivoted idler that correctly steers the belt when the conveyor is operating in one direction will mistrack a belt moving in the opposite direction."

Martin Engineering designers determined that the same multiple-pivot, torque-multiplying technology as the upper and lower tracker could be utilized for a reversing belt by adding a circular forked paddle or stainless steel lamella that detects the belt direction. Utilizing two sets of sensing arm assemblies on either side of the unit to accommodate belt widths of 24 to 84 inches (500 to 2200mm), the arms are engaged based upon the direction of the spinning paddle.

The Martin® Tracker™ Reversing is also available with an air operated cylinder replacing the paddle wheel, to activate the sensing rollers on the proper end of the unit when belt direction changes. To keep the belt centered in a reversing conveyor’s loading zones, Martin Engineering recommends the installation of one reversing tracker at the entry and exit of each loading point.

"Although reducing downtime and operating costs are at the top of our minds with these designs, safety is a primary motivating factor behind all of our components," Marshall said. "By incorporating that philosophy into the Tracker designs, we’ve produced a better end product that delivers a complete solution to mistracking issues."

A worldwide leader in bulk material handling technology has announced the formation of a new...

A worldwide leader in belt conveyor technology has become the sole distributor of the acclaimed...

The adverse impact of dust is limited only by the distance it can be carried...