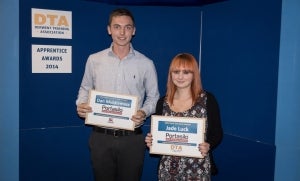 Apprentices at York-based Portasilo have been recognised for their talent and dedication at the annual Apprentice of the Year Awards, held by the Derwent Training Association (DTA).

Young engineers Jade Luck, in her final year of a fabrication and welding apprenticeship, and first-year apprentice Dan Middlemass both work at Portasilo, which manufactures bulk storage and materials handling equipment for a global customer base.

Jade, who joined Portasilo three years ago, is now the second fully qualified female fabricator and welder to join the team. She received the inaugural Lord Derwent Award for Effort and Achievement from DTA’s patron at a ceremony that was also attended by Anne McIntosh, MP for Thirsk and Malton, Cllr Linda Cowling, Leader of Ryedale District Council, and Janet Waggott, Chief Executive of Ryedale District Council.

Dan Middlemass, who has just started his second year in the drawing office at Portasilo, received the Fabrication and Welding Apprentice of the Year Award for first-year apprentices from Anne McIntosh MP.

Portasilo has been running a hugely successful apprenticeship scheme since the late 1960s, investing in the next generation of engineering talent. Currently there are ten apprentices working at the company, which has a workforce of 150, including ten based in India.

All apprentices work on multi-million pound projects, designing and building bulk storage components, which are constructed in the company’s advanced manufacturing facility in York, UK. Recent projects include two 85m-tall storage silos for Drax Power Station in Selby, as part of a scheme to transform it into a predominantly biomass-fuelled generator.

Portasilo managing director Neil Gardiner said: "These awards are a great reflection on our apprentices and all our people who have important roles to play in the development of skilled engineers. Well done to Jade and Dan on their achievements.

"It’s imperative for the future of our business that we maintain a continuous stream of new talent and our apprenticeship scheme has proved highly effective since it was established.

"Derwent Training Association is a fantastic organisation to work with and we wish all this year’s prize-winners continued success in their careers."

DTA general manager John Brockett said: "These young men and women have excelled, not only in their training with us but in the workplace as well and it is right they receive the recognition they deserve, but we should also congratulate those apprentices who have not received an award this year, because they all work hard to achieve a brighter future for themselves."

Portasilo designs and produces versatile silos that can be customised to meet specific requirements. All...

Portasilo Celebrates 60 Years at the Forefront of Bulk Handling Innovation

Portasilo is celebrating 60 years at the forefront of the UK's bulk storage and handling...