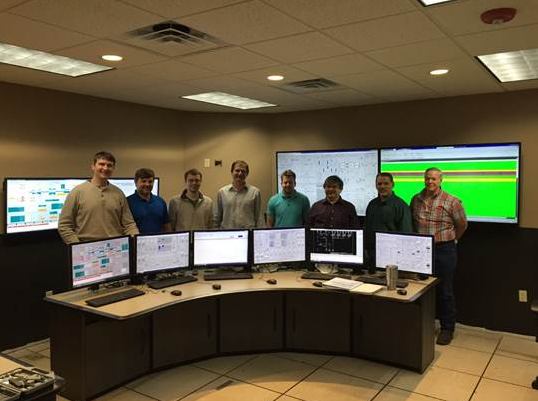 Against an ultra-aggressive schedule and demanding requirements for fidelity, WSC delivered a full scope fossil simulator to Plant Greene County of Alabama Power Company a subsidiary of Southern Company. The unique challenges on this project included not only a conversion of the approximately 50-year old 250 MWe plant from coal to natural gas firing, but also a complete control system and operator interface replacement from the original DCS and HMI, as well as conversion of some of the remaining analog panel controls.

With a practical project start date of September 2015, the simulator was completed in just seven months, and installed on-site and accepted as RFT (Ready For Training) on April 8, 2016.

In parallel with integration and factory testing activities in the first quarter of 2016, the simulator was used by the customer and DCS vendor to test and validate control strategies starting just about four months after project kickoff. Numerous benefits were derived during this Simulation Assisted Engineering (SAE) style process through the end of March, resulting in corrections and enhancements to both the DCS controls and the HMI screens to be implemented on the unit. During this time, the master copy of the controls resided on the simulator, and those controls were transferred to the unit during the week after site acceptance.

The simulator is now being used for initial operator training, and will be updated at an appropriate time with the next revision of the control system. WSC will also be providing on-site SAE support during the plant startup and commissioning. The SAE process has successfully been employed by WSC with major US and international partners for well over a decade and has resulted in tremendous benefits to AE/EPC and DCS companies alike, as well as utilities and end-customers. As a pioneer in the "beyond-training use of high fidelity simulation, WSC is proud of this project as we are of numerous past successes, and looks forward to continuing to provide the best simulation value to all of our Southern Company customers.

"The Plant Greene County simulator project was a great success for WSC and Plant Greene County. It allowed us to train operators, I&C specialists, test controls logic, check graphics, and to familiarize plant personnel with the new DCS and gas burning systems well before the actual unit was ready. I appreciate all of the hard work and support the WSC team has provided and is still providing that continues to make this project such a success. Kelly Whigham Operations Team Leader / Project Lead.

Engineers have a blind spot with their traditional engineering tools, which provide only static information....