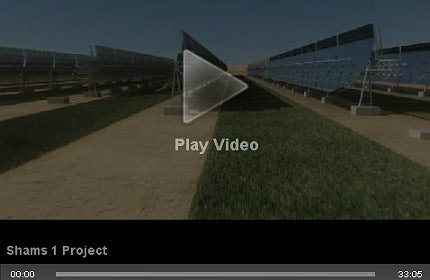 There could be perhaps no more fitting place to build a solar power project than right underneath the blazing desert sun.

Renewable power projects are often criticised for relying on an intermittent source of energy, but for Shams 1, the supply of free sunlight is constant.

“There could be perhaps no more fitting place to build a solar power project than right underneath the blazing desert sun.”

During the day, the plant’s parabolic trough technology concentrates heat from direct sunlight and produces steam, which drives a turbine and produces electricity.

Developed by Shams Power Company, a joint venture between Masdar, Total and Spain’s Abengoa Solar, the $600m plant will power 20,000 homes in the UAE and displace 175,000 tonnes of CO2 per year.

The CSP plant also features a dry-cooling system that reduces the consumption of water, a critical benefit in the arid desert.

Speaking at the inauguration in March, Total chairman and CEO Christophe de Margerie said: “As a long-lasting partner of Abu Dhabi, we are particularly proud to have been part of the challenging adventure that was Shams 1 construction. This is a major step in the process of transforming the capabilities of solar power in the region.”

“We share Abu Dhabi’s vision that renewables have a promising future alongside fossil energies. Total is today a world leader in solar industry. As such, we are pleased to accompany the Emirate in the diversification of its energy mix,” de Margerie added.

The CSP is able to store heat, allowing homes and businesses to be powered at night – an impossible task with photovoltaic technology. And with solar power generated during peak demand, the plant is able to reduce the UAE’s need for ‘peak shaving’ generators, which are expensive and idle for most of the year.

But in future, Shams Power expects most of the UAE’s renewable energy to come from PV systems as they are cheaper, faster to build and can be installed in more locations.

Masdar CEO Dr. Sultan Ahmed Al Jaber told the National newspaper: “Recent drops in the price of PV panels of up to two-thirds are making PV an increasingly attractive option in the UAE and around the world.”

Masdar, which now accounts for nearly 68% of the Gulf’s renewable energy capacity and close to ten percent of the world’s installed CSP capacity, is currently working on the 100MW Noor 1 project, which will rely entirely on PV technology.

Hydro, biochemical and solar energy are all potent sources of renewable power, but they are yet to be scaled-down to the point where affordable mass production is possible.