The Hydrogen market is expected to expand significantly in the next few years – GlobalData has tracked more than 43.6 mtpa of total active and upcoming low carbon hydrogen production capacity (green and blue hydrogen). As the industry develops and the cost of producing hydrogen drops, demand is expected to increase significantly. As a result, countries across the world are announcing much needed supporting policy framework for hydrogen. While refining and ammonia production have traditionally been the key consumer sectors for hydrogen, new uses such as transport and energy storage are set to influence the market. While green hydrogen presently has a small share in the overall production mix, it is poised to increase given the ambitious targets announced by various countries. GlobalData’s report provides insights into key issues in the emerging hydrogen space, such as: Read this report and formulate winning strategies for your business.
By GlobalData 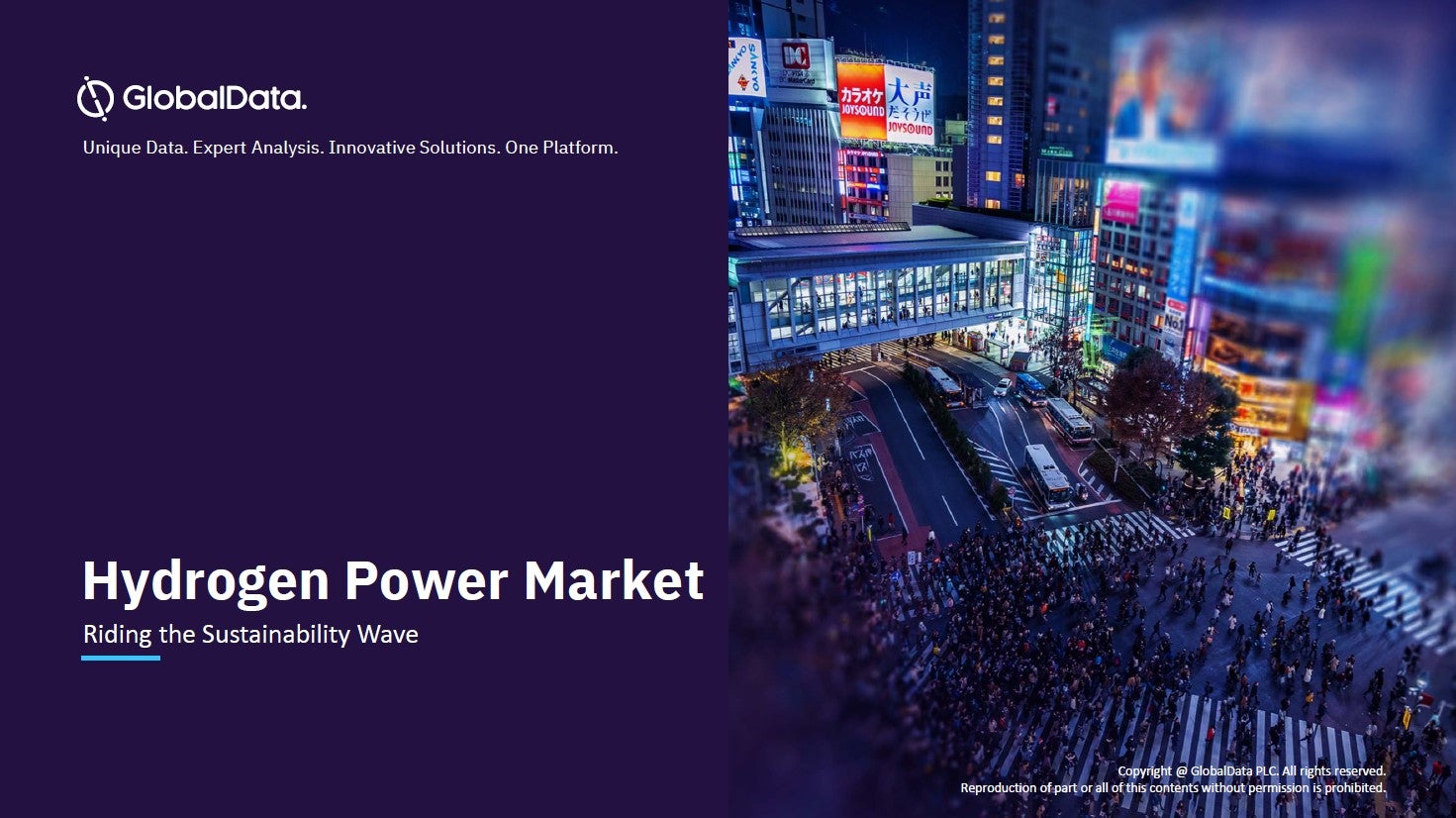 Thank you. Please check your email to download the Report.

In the US, smart grid development remains highly uneven; looking at the GridWise Alliance’s annual Grid Modernisation Index, there are acres of open space between the most proactive states (including California, Texas and Illinois) and those languishing at the bottom of the table, such as Rhode Island, Nebraska and North Dakota.

In this context, perhaps it’s unsurprising that so many Americans are unaware that the smart grid revolution is even happening. According to research by the Smart Grid Consumer Collaborative (SGCC), an Atlanta-based non-profit focused on educating the public about grid modernisation, only around a quarter of American consumers have some awareness of smart grid technology. Much of the SGCC’s research from 2016 was collated in its 2017 State of the Consumer report.

So how can consumer awareness of and engagement with smart grids be boosted, and what can electrical utilities learn about marketing and communications – not the power industry’s traditional strong suit by any stretch of the imagination – to get to know their customers’ values and, in turn, include them in new grid modernisation efforts? We spoke to SGCC president and CEO Patty Durand to find out.

Chris Lo: How would you characterise the average American energy consumer’s knowledge of and attitude towards modern grid technologies?

Patty Durand: In terms of knowledge, we do an annual benchmark survey of US consumer awareness of smart grid and energy technology questions, and we show that knowledge is fairly low. That has not changed in the last six years. We’re about to field our seventh survey for 2017. We’ve shown that about 25% of US consumers are aware of grid modernisation happening.

CL: What’s the key to improving consumer awareness around these technologies in the future?

PD: I think it would be any marketing campaign, just like we had a major marketing campaign that was national in scope for recycling in the 70s. Before that, no one could imagine people would sort their trash and put recyclables out in the bin by the curb. But now that’s routinely done in neighbourhoods and cities throughout the world.

So it would be a national marketing campaign. We do not have that here in the US, and no plans to do that. So awareness will remain low except when there’s a mainstream media story or if the utility itself will educate consumers.

And then there are non-profits like ours, we’re educating consumers online. We have a very robust Twitter, Pinterest and Facebook social media campaign, and we also have YouTube videos and an online website called whatissmartgrid.org to raise consumer awareness. I think we’ve reached about 200,000 consumers. It’s not a national campaign so I don’t know if we’ll move the needle, but it’s still really good.

CL: What are the unmet needs that should be driving the smart grid-based technologies offered to consumers?

PD: I think consumers have a lot more interest in energy than utilities often acknowledge. That finding from the State of the Consumer Report came from a study where we compared a set of control states to a set of advanced states – advanced states that have done a lot of modernisation investments and control states that have done none. We found that consumer interest in technologies and programmes are just the same wherever they live.

So in control states, a lot of consumers are interested in pricing plans, ways to save money like time-varying rate plans. They’re interested in those programmes but they don’t have them. They’re also interested in online access to data and other ways to manage energy.

We have a segmentation framework that breaks down consumer attitudes and values into five broad categories. People in those categories who care about addressing climate change don’t care where they live, they want solutions that will help them reduce their energy footprint. Other consumers don’t care about that, they care about saving money, and where they live doesn’t matter.

The other most important category is technology consumers, what you might call early adopters – they are the ones buying the Nest thermostat, wanting to see data online. All those things are because of modernised grid investments, and consumers want those things, even in states that are not modernised.

CL: Are utilities becoming more comfortable with the growth of the ‘empowered consumer’?

PD: I don’t know if there’s one answer for that. I think many utilities are doing a great job. Other utilities aren’t doing anything at all. They’re either laggards or they’re waiting to see, or they haven’t gotten approval from the public utility commission for those investments. It’s a little frustrating in the US because we have 50 different states with 50 different regulators, and they each regulate the power grid in their state. So it’s a very complex picture.

CL: Could you elaborate on the growing importance of communication with the customer when it comes to smart grid offerings?

PD: We’ve found it’s critical. It’s the big difference between consumer satisfaction with their utility and with their modernised grid investment or potential backlash from consumers who find out about it but weren’t appropriately engaged or communicated with, and then make their own minds up about what’s going on, and it’s almost always negative.

So we’ve had a lot of consumer backlash in the US in states where the community wasn’t engaged. We have found some best practices, including going to community events with information, brochures, speakers, maybe little demos, and more importantly, engaging with community groups like churches, environmental groups and civic groups.

In one of the most innovative programmes I heard about from San Diego Gas & Electric [SDG&E] – they invested in community groups with small grants of $500-$750, and they offered those grants, and the grantee would submit an application. They would bring in the leaders of those groups, give them a little bit of training, an hour or two of training about what the smart grid is and what SDG&E is doing, and then send them back out to talk to their own groups about it. They spent about $7,000 in total on that programme, but they received so much community praise and support for that small effort, and they had almost no backlash.

CL: In a legislative and regulatory sense, what is being done at the state level to create a fair and supportive environment for smart grid technologies around the US?

PD: Many states have done a lot for modernising the grid and have been very supportive, if not outright driving it. If you look at the state of New York, prior to Hurricane Sandy it wasn’t doing anything with modernising the grid in terms of consumer engagement. [After Hurricane Sandy] the state officials said, ‘We’re not going to have this anymore; you will modernise the grid, you will build resilience into it; consumers must have access to programmes and services they don’t have now.’

So the New York REV [Reforming the Energy Vision] process is underway and in its final stages of being planned and executed soon. Every state has a different story, with some being really amazing, like New York, and some being not great.

CL: What needs to be done to educate consumers on the emerging smart grid technologies that will be growing in this decade and through the 2020s?

PD: I think it’s got to be good communications and messaging, and one of the things we heavily promote is segmentation. We recommend that utilities and their marketing teams segment consumers and find out who their consumers are, just like every other industry does; it’s just utilities that have so far been lagging behind.

It’s about finding out who their consumers are, and then creating programmes and messages according to those consumers’ attitudes and values. Not every consumer is going to be interested in the more complex or more expensive programmes. I’m not saying expensive is the best – complex could be a demand response programme with a time-of-use rate plan.

But then it would just take education and segmentation – messaging consumers according to their values and making them interested and aware of the programme. The education should be along the lines of what those consumers care about, and less about what the utility cares about. Utilities have viewed consumers as ratepayers or ‘load’, and have never needed to know who their consumers were. Those days are over; they need to know now.

The Hydrogen market is expected to expand significantly in the next few years – GlobalData has tracked more than 43.6 mtpa of total active and upcoming low carbon hydrogen production capacity (green and blue hydrogen). As the industry develops and the cost of producing hydrogen drops, demand is expected to increase significantly. As a result, countries across the world are announcing much needed supporting policy framework for hydrogen. While refining and ammonia production have traditionally been the key consumer sectors for hydrogen, new uses such as transport and energy storage are set to influence the market. While green hydrogen presently has a small share in the overall production mix, it is poised to increase given the ambitious targets announced by various countries. GlobalData’s report provides insights into key issues in the emerging hydrogen space, such as: Read this report and formulate winning strategies for your business.
By GlobalData