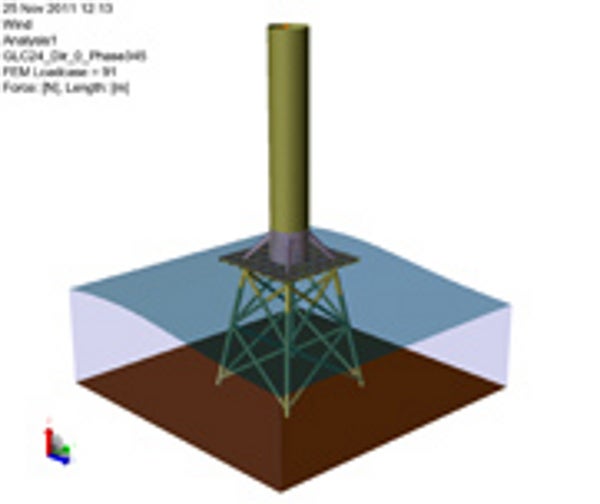 Sesam GeniE is a design tool for engineering floating and fixed offshore structures.

The new module, named Sesam GeniE Wind, is designed to address the wind industry's need to model the combined effect of wind and wave loads.

Fatigue and ultimate strength calculations can be performed based on direct time-series simulations of combined wave and wind loads.

DNV product manager Torbjørn Lindemark said the company can now provide a complete software solution for the entire value chain, from construction through to installation, in-place, modification and removal conditions.

In addition, the 3D modelling functionality in GeniE allows traditional beam modelling of the slender parts.

Furthermore, the complex transition between the wind tower and supporting structure can be accurately modelled using shell elements.

This modelling provides an accurate determination of the strength as compared to pure beam modelling.

The programme generates wave loads combined with imported wind load time series to determine the combined response for the fatigue and strength analysis.

"S-N curves and stress concentration factors for tubular joints are automatically assigned to the fatigue hot spots to speed up the analysis process," said Lindemark.

DNV Software managing director Are Follesdal Tjonn said there is a great market potential for innovative wind software like Sesam GeniE Wind, and that they are well positioned to achieve further growth.

Sesam software was first launched in 1969 with the purpose to perform strength analysis of large ship structures.