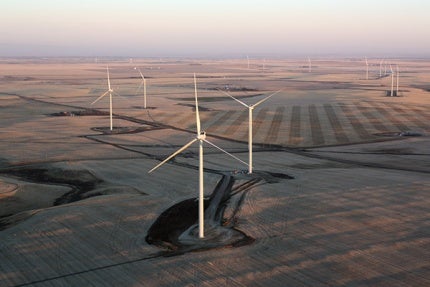 The $600m project is the biggest investment in wind energy in the province, and is also the biggest wind project in Western Canada.

Construction began in May 2013, with commissioning taking place in May 2014. The farm is expected to generate more than 1,000GWh of clean energy annually, which would be sufficient for approximately 140,000 Albertan households. Over 350 construction and 20 permanent operations and maintenance jobs were created by the project.

“The $600m project is the biggest investment in wind energy in the province, and is also the biggest wind project in Western Canada.”

EDF EN Canada acted as the construction manager under a fixed-price agreement. The project received a C$10m ($9.2m) commitment from the Alberta-based Climate Change and Emissions Management Corporation.

The Blackspring Ridge wind project was conceptualised by the Greengate Power Corporation in 2008. EDF EN Canada and Enbridge acquired it in April 2013.

The wind farm is situated approximately 50km north of Lethbridge, Alberta, on 48,000 acres of private land in Vulcan County. It features 166 Vestas V100 wind turbines, rated at 1.8MW each. Each turbine has a swept area of 7,850m², hub height of 80m, rotor diameter of 100m and maximum blade length of 49m.

Major works included access roads to the individual turbines, underground power collection system routes and foundations for the turbines. A project laydown yard, which will act as the main hub for the development of office trailers, material storage and deliveries, was also constructed, as was a permanent operations and maintenance building.

The works also included the construction of approximately 80m of a long, double-circuit 240kV transmission line from Travers 554S to the 1036L transmission line and a telecommunications tower within the switching station fence.

Transmission and sale of power

The renewable power generated by the turbines will be collected by a 34.5kV gathering system at the substation and will be transmitted to the existing 240kV transmission line 1036L via the new Travers 554S switching station.

“Pacific Gas and Electric will purchase the renewable energy credits (RECs) generated at the wind farm under a 20-year purchase agreement.”

Pacific Gas and Electric will purchase the renewable energy credits (RECs) generated at the wind farm under a 20-year purchase agreement. The generated electricity is to be sold to the Power Pool of Alberta via fixed-price through mid and long-term contracts.

Mortenson Construction was awarded the engineering, procurement and construction contract, which included the installation of turbine foundations, erection of turbines, underground power collection cables, access roads and a substation.

Altalink signed an agreement for the consultation and construction of the transmission line and switching station.

Mortenson was awarded the subcontract for the substation to the Western Pacific, and used IDL Projects for the civil and foundation works.