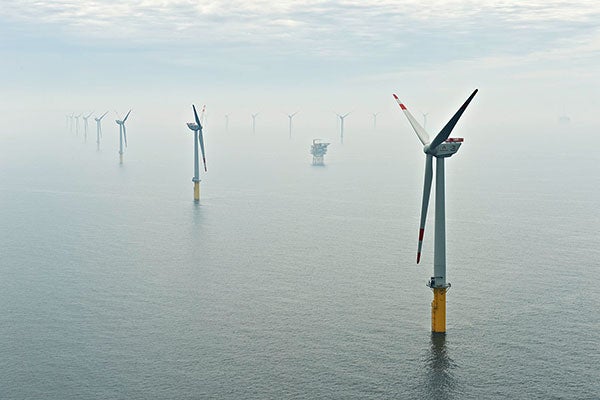 The 400MW Borkum West II wind farm is being built 45km offshore the Borkum island in the North Sea. Spread over 56km2, it is the first fully large-scale municipal offshore project in Europe.

German utility company Trianel Windkraftwerk Borkum is carrying out the project at a cost of €1.6bn. The venture is expected to generate 1,200GWh annually to power nearly 250,000 households.

The wind farm was approved by the Federal Maritime and Hydrographic Agency in June 2008. It will include 80 wind turbines with an individual capacity of 5MW, being installed in two phases of 40 turbines each.

Construction of the first phase began in September 2011 and the final assembly of the first 40 units was completed in June 2014. The first turbine was installed in July 2013. The second phase is expected to be completed in 2015.

The project is expected to cut 7t of carbon dioxide emissions annually and help the diversification of energy supply.

In December 2009 the project received €40m in funding from the EU under the European Energy Programme for Economic Recovery (EEPR).

The wind farm will consist of 80 turbines, each of which can rotate at speeds of 25m/sec. The turbines can also operate during heavy storms. A 400MW normally unmanned offshore substation will serve the wind farm. The substation will have traditional jacket and topsides facilities.

“The venture is expected to generate 1,200GWh annually to power nearly 250,000 households.”

The wind turbines are held by tripod jackets connected to a foundation structure, installed under water at depths of around 30m. The turbines are connected to the tripods through steel piles with a diameter of 2.5m.

Electricity generated by the wind farm will be transmitted onshore to the island of Norderney by a 65km direct-current submarine cable. From the island, the electricity will be fed into Germany’s high voltage network.

“The project is expected to cut 7t of carbon dioxide emissions annually and help the diversification of energy supply.”

In November 2009, Noble Denton and Germanischer Lloyd were awarded a contract to provide technical support and project management services for the wind farm.

A joint venture between Nordsee Nassbagger und Tiefbau and GeoSea won a €70m contract in August 2010 for prepiling and installation of turbines in the first phase.

Areva was awarded a €400m contract in December 2010 for supplying 40 wind turbines for the project. The company supplied its MultiBrid M5000 offshore turbines under the contract, which also includes option for an additional 40 turbines. Scope of work for Areva includes commissioning, testing and maintenance of the turbines.

Norddeutsche Seekabelwerke was awarded a €22m contract in February 2011 to install the submarine cables for the first phase of the project. The company will use its NOSTAG 10 ship to install the cables.

SgurrEnergy, a multi-disciplinary engineering consultancy, was contracted in June 2011 to provide lender’s technical advice support that includes construction monitoring services for the project.