The wind farm is being developed by EverPower Wind Holdings.
Upon completion, it will provide electricity to 42,000 homes.
EverPower has been awarded a $3m grant for the Buckeye I wind project. 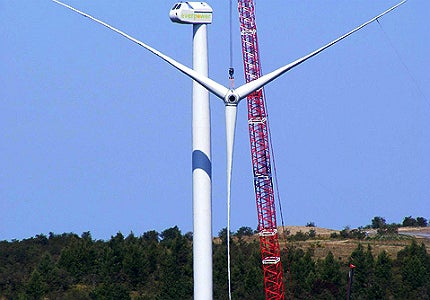 The Buckeye Wind Project will be the first commercial utility-scale project in Ohio. Located in the Champaign County of central Ohio, the wind farm is being developed by EverPower Wind Holdings, a subsidiary of New York-based EverPower Renewables Corporation.

The first phase of the project will cost $380m. Upon completion, it will provide electricity to 42,000 homes. The project will offset greenhouse-gas emissions by 350,000t annually, while reducing the state’s dependency on fossil fuels. Phase one of project received approval from the Ohio Power Siting Board (OPSB) on 24 March 2010.

“Construction was meant to begin in mid-2010 but has been delayed due to opposition from various affected authorities.”

Construction was meant to begin in mid-2010 but has been delayed due to opposition from various affected authorities as well as a local citizens group. Two appeals were filed in September 2010; the first was filed by a local citizens group commonly known as Union Citizens United and the other one was filed by Champaign County, Goshen Township, Salem Township and Union Township. The appeals were heard by Ohio’s highest court in the second half of 2011.

The case later moved to the Ohio Supreme Court which upheld the approval provided by Ohio State for constructing the project. As of December 2012, phase one of project was in its final stages of obtaining permission.

EverPower submitted an application with the Ohio state for the second phase of the project (Buckeye II) in May 2012. The proposed Buckeye II will provide electricity to 40,000 homes.

Construction of both the phases is expected to start in 2013. Nearly 600 jobs during construction and 38 permanent jobs are expected to be created by the project.

Buckeye II will be EverPower’s third project in Ohio followed by Buckeye I in Champaign County and the Hardin Wind Project in Hardin County.

EverPower has been awarded a $3m grant for the Buckeye I wind project under Ohio’s Wind Production & Manufacturing Incentive Program. The programme was set up to support the development of wind power projects. Under this programme, the project will receive 1¢/KWh and an additional 0.2¢/KWh if the plant is installed with Ohio-made wind turbines. The incentive programme is a part of Ohio’s alternative energy portfolio standard.

The project has also received financial backing from Terra Firm, a private equity arm of British company Guy Hands, which acquired EverPower Holdings for $350m in 2008.

The Buckeye I wind farm will be spread across 10,000 acres of leased land and will be installed with 54 wind turbines. Each turbine, measuring 500ft in height, will generate 2.5MW of electricity, sufficient to power 600 to 750 homes. The type of turbines is not yet selected, but the project has been designed to suit either the Repower MM925 turbine or Nordex N100 or N90 turbine types.

“EverPower submitted an application with the Ohio state for the second phase of the project (Buckeye II) in May 2012.”

The wind farm will have an installed capacity of 175MW and generate 135MW annually.

The proposed project was initially designed with 70 turbines. The approval, however, was granted for just 54 turbines by the Ohio Power Siting Board (OPSB). The other 16 turbines were disapproved citing aviation hazards, as it was proposed that they should be constructed near Champaign’s airport.

The Buckeye II wind farm, with up to 56 new turbines, will cover 13,500 acres of land next to Buckeye I wind farm. The height of the turbines will be 492ft from base to blade tip. The towers will be 328ft high. The installed capacity of the second phase will range between 91MW to 171MW.

If the second phase of Buckeye wind Farm is approved, the total number of turbines in the project will be 110.

RePower, GE, Vestas, Nordex and Gamesa are being considered as the possible turbine manufacturers for the second phase.

In 2008, Ohio’s installed electricity capacity stood at 38,000MW, 86% of which was generated from coal-fired plants and 14% from nuclear and renewable sources. The state is one of the largest producers of electricity and also the fourth largest consumer of coal in the US.

As most of its electricity is generated from coal-fired plants, Ohio is also the highest greenhouse-gases emitting state in the nation. In order to reduce the greenhouse effect, the state implemented a new alternative energy portfolio standard in May 2008. The standard requires 25% of the electricity sold in the state to be generated from alternative energy sources by 2025, and at least half of it to be generated through wind power.

As on 11 February 2010, the state had the potential to install 55GW of onshore wind power that will generate 152TWh a year. As of May 2010, however, Ohio had used only 1.8% of its total wind power potential and ranked 27th in the US, with 7.2MW of wind energy production.

The Papalote Creek Wind Farm is located in San Patricio County, 30 miles north of Corpus Christi in Texas, US.

Lower Snake River Wind Project is a 1,432MW wind farm located in the state of Washington, in the US’s north-west. The project is being developed in phases.