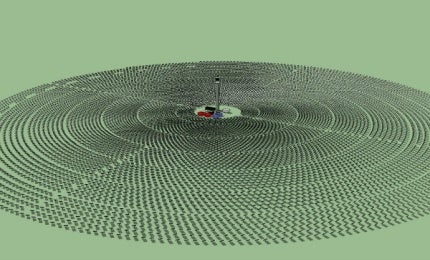 Cerro Dominador is a 110MW concentrated solar power plant (CSP) being developed by Abengoa. The plant is situated in the commune of María Elena, in the Antofagasta region, Atacama Desert, Chile.

The ground-breaking ceremony for the CSP project was held in May and completion is expected in 2017.

As part of Chile’s national renewable energy development programme, Abengoa was selected in an international tender by the Chilean Ministry of Energy and the Chilean Economic Development Agency, Corporación de Fomento de la Producción (Corfo) to develop the plant in January 2014.

The programme intends to promote Chile’s economic development and reduce dependency on coal and natural gas, while attempting to produce 20% of its electricity from clean energy sources by 2025.

“The molten salt technology used in the plant will have the capacity of storing electricity for up to 18 hours, allowing continuous storage and transmission, which will generate electricity 24 hours a day.”

The molten salt technology used in the plant will have the capacity of storing electricity for up to 18 hours, allowing continuous storage and transmission, which will generate electricity 24 hours a day. Environmental approval was obtained from the Chilean Environmental Service in early May 2014.

The solar-thermal power plant has a circular solar field spread across 700ha around a central tower, while the solar field consists of 10,600 heliostats, with the reflective surface area of 140m² each. These heliostats automatically track the sun on two axes, concentrating solar power at the receiver, which is placed at a height of 220m on the 250m-tall tower.

Concentrated heat is transferred to a current of cold molten salts placed in a system of tanks. The temperature at the receiver’s inlet is 300ºC and the outlet temperature is 550ºC. The heated salts are then used to heat water to create steam, which in turn is used to drive an 110MW turbine for generating electricity.

The solar power generating station will also contain a substation and transmission line to supply power to the Northern Interconnected System (SING).

Abengoa has designed and developed a thermal storage system that uses molten salt and has the storage capacity of 18 hours, enabling the plant to reach more than 80% of operational capacity. The system contains two separate tanks for cold and hot salts. The thermal energy stored in the tanks will be used to produce energy in the absence of sun light, enabling 24/7 operation.

“An average of 700 direct jobs will be generated during the power plant construction, while approximately 2,000 workers will be working at the peak of construction.”

The storage system makes the plant dispatchable, meaning the plant could customise its production according to the grid needs.

The project will prevent the emission of approximately 643,000t of CO2 each year, which is equal to the amount of CO2 emitted from 357,000 vehicles each year.

An average of 700 direct jobs will be generated during the power plant construction, while approximately 2,000 workers will be working at the peak of construction. In addition, 50 long-term jobs will be created when the project enters its commercial operational phase.

As a part of the international tender launched by the Chilean Ministry of Energy and Corfo, the project will receive a grant of up to $20m from the Ministry of Energy, operating through Corfo. A concession for use of government land has also been granted.

Additional funding amounting to approximately $500m was arranged by the IADB (Inter-American Development Bank), the Clean Technology Fund, the German development bank KFW, European Union and the Canadian Fund, in coordination with the Chilean Government.