Expand
The Chaglla project will utilise the Huallaga River water to generate power. Image courtesy of Paul.
The river water will be diverted through a 14.7km intake tunnel to the main powerhouse. Image courtesy of The Peru Presidency.
The spiral box of the turbine being installed. The plant will feature two turbine generators. 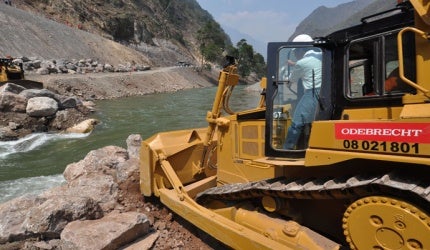 The market for battery energy storage is estimated to grow to $10.84bn in 2026. The fall in battery technology prices and the increasing need for grid stability are just two reasons GlobalData have predicted for this growth, with the integration of renewable power holding significant sway over the power market. Over the last decade, various new digital and smart technologies have been integrated, with countries aggressively promoting the modernization of grids, enhancing the grids’ capability to meet present and future requirements. As part of the effort, batteries are being deployed for a wide range of uses. A few such uses include aiding smart grids, integrating renewables, and creating responsive electricity markets. Read this report for expert insights into: Get ahead of this growing market and win big by utilizing our report.
by GlobalData
Thank you.Please check your email to download the Report.

Construction of the project began in May 2011 and operations commenced in 2016. The plant has an operational life of 30 years. It required a $1.2bn investment and produces approximately 2.8GW/h a year while offsetting approximately 467,000t of carbon dioxide emissions from the atmosphere.

In August 2017, Odebrecht Latinvest entered an agreement with a consortium led by the China Three Gorges Corporation (CTG) to dispose of the Chaglla hydroelectric plant.

The Chaglla hydroelectric project is located on the Huallaga River in the Chaglla district of Huanuco, Peru. It includes a concrete-face rock-filled dam, which impounds a 4.66km² reservoir upstream of the dam, diversion tunnel and hydroelectric generation facilities, comprising a powerhouse, substation and transmission line.

“Construction of the project began in May 2011 and operations commenced in 2016.”

The rock-filled dam has a maximum height of 202m and a crest length of approximately 273m, while the crest of the dam is located at an elevation of 1,202m above sea level and 11.2m-wide.

The reservoir has an elevation of 1,196m and a water surface area of 4.5km². It has a storage capacity of approximately 375 million cubic metres, and three tunnels with a total length of 2,850m were built on the left margin for spillway discharge.

In addition, the plant features two turbine generators with a nominal output of 253MVA and frequency of 60Hz. These turbines have a nominal voltage of 13.8kV and operate at a synchronous speed of 900rpm.

The substation is situated above the main powerhouse at an elevation between 900m to 925m.

The power generated by the plant is transferred to the Peruvian national grid (Sistema Electrico Interconectado Nacional-SEIN) at the Paragsha substation, via a 137km-long, 220kV transmission line.

Construction of the hydropower project

Four sites were created for the construction phase. Major works include the construction of the concrete-face dam with a 466ha reservoir, a surface powerhouse and a 1,053m-long diversion, spillway and headrace tunnel. For the foundation and dam construction, an upstream and downstream cofferdam was constructed at 1,068m and 1,009m respectively.

“The power generated by the plant is transferred to the Peruvian national grid.”

Construction works also included the river bypass through trunk tunnelling, which has a diameter of 12.5m and length of 1,125m. The upstream cofferdam measures 66m, while the downstream is 14m-high.

Alstom was awarded a contract to supply all the hydro and electromechanical equipment, spare parts and services. The scope of supply included two generation units with a total power of 450MW, power transformers and switchyard equipment, as well as the complete mini hydropower plant.

Mott MacDonald was engaged by The Bank of New York Mellon as the independent engineer to monitor the power plant construction. The contractual scope included providing support for the lenders in the construction, operations and monitoring phases of the project.