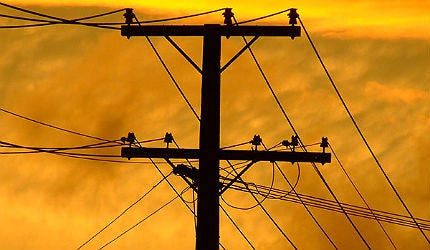 Dabhol Power Plant is a 1,967MW combined cycle power station located 160km south of Mumbai in the Ratnagiri District of Maharashtra, India. It is one of the most controversial power projects built in India.

It was originally developed by a joint venture led by Enron, a US-based company which went bankrupt after an accounting scandal in 2001. The plant is currently owned and operated by Ratnagiri Gas and Power Private limited (RGPPL), a joint venture company created in 2005.

Dabhol power plant was erected as early as 1992, with Enron Development Corporation of USA as its major project owner. GE and Bechtel were the EPC contractors. The 740MW phase one of the project commenced operations in 1999.

Phase one operations and further construction on the 1,444MW phase two were halted in 2001 following payment and contract dispute between the Maharashtra state government and the plant owners. The phase two construction of the plant was 90% complete by that time.

The plant was closed for about five years before RGPPL took over the power station in 2006. The troubles for the power plant continue even today as its power generation is sinking because of the fall in natural gas supply to the plant.

Dabhol requires 9.7 million standard cubic metres a day (mscmd) for its full scale operation. The plant has not been able to generate more than 700MW for the last two years, due to the shortage of gas supply allocated to the plant from the KG-D6 gas field operated by Reliance.

With the fall in output of KG-D6 by more than 55% from 2010 to 2011, Dabhol was getting less than 3mscmd, whereas it was allocated 8.5mscmd from the field. This reduced the plant’s operational utilisation to one third of its installed capacity.

Power generation from the plant had plunged to less than 450MW towards the end of 2012.

“Power generation from the plant had plunged to less than 450MW towards the end of 2012.”

In March 1993, Dabhol Power Company (DPC), a 100% foreign owned private company, was incorporated in India as the operating entity of the project. It was a joint venture of Enron (80%), General Electric (ten percent) and Bechtel (ten percent).

Enron had approached World Bank to support the project, but in April 1993, the World Bank decided not to finance the power plant, raising doubts over the economic viability of the project.

A loan of $635m was subsequently obtained from Bank of America, ABN Amro, US Export-Import Bank, the Overseas Private Investment Corporation (OPIC) and a group of Indian banks.

Opposition to the Indian power plant

The Dabhol power project has been dogged by controversies since its inception. It triggered a negative reaction as there were allegations of favouritism, corruption, a lack of transparency and overlooking of environmental concern levelled against the award of project. The project was also vehemently criticised with the charge of human rights violations and suppression of local protests by Human Rights Watch and Amnesty International.

A power purchase agreement was signed between DPC and MSEB in December 1993, under which MSEB would buy 90% of power produced by the plant and receive 30% of the DPC profits annually. It was also agreed that MSEB would bear any increase in fuel price.

A committee instituted in 1995 under the new political leadership of Maharashtra, however, recommended scrapping the Dabhol project. Enron began arbitration proceeding in the same year and sought $300m in compensation.

In February 1996, the Maharashtra state and DPC entered into a revised agreement, but the criticism regarding the higher payment for power from the Dabhol plant compared to other projects and the risk of currency fluctuation remained intact.

Enron completed phase one of the Dabhol plant using naphtha as fuel, amid the controversies. This phase commenced operation in 1999.

“The project was also vehemently criticised with the charge of human rights violations and suppression of local protests.”

India approved Enron’s proposal to expand the project (phase two) and build the Dabhol liquefied natural gas (LNG) terminal with a regasification facility in 1997. The LNG terminal was envisaged by Enron as the hub of a future gas network in India, based on imported gas from the Middle East.

MSEB bought part of Enron’s stake in DPC in 1998, by which Enron’s share in the company reduced to 65%. The price of the power from Dabhol was far more expensive than what Maharashtra could afford. As of 2001 the price of power from the Dabhol power plant was four times higher than that offered by domestic power producers.

The Maharashtra government subsequently stopped paying for Dabhol. The unpaid bill amounted to $22m as of December 2000.

The state insisted on the renegotiation of the contracts at a lower price, which was refused by Enron. Enron once again started the arbitration proceedings in April 2001 and stopped phase one operations as well as the phase two construction.

With the fall out of Enron’s bankruptcy, GE and Bechtel purchased Enron’s stake in DPC. The plant remained non-operational for five years. The involved parties settled their disputes over payments in the mean time.

The project cost was estimated to be $1.82bn at the time of asset transfer. The project cost further escalated to $2.9bn after RGPPL took over to own and operate the plant in 2006.

The power distribution company Mahavitaran currently buys 95% of the power produced by the plant at a price of INR 5 to 5.30 per unit, whereas the other five percent is bought by Goa, and Daman and Diu.

The combined cycle Dabhol power plant with its township spreads across an area of 1,565 acres.

The plant is comprised of three blocks (640MW, 663.54MW and 663.54MW). Each block is designed with a multishaft combined cycle module and consists of two gas turbines and one steam turbine, provided by GE.

Dabhol uses regasified liquefied natural gas (R-LNG) as its primary fuel, which is transported through the Dahej-Panvel-Dabhol Pipeline. The plant uses water from the Vashisthi River through a 50km inlet line from Chiplun. It uses sea water for cooling.

The electrical output of the plant is transmitted through two 400kV double circuit lines, namely Koyna 1 & 2 and Nagothane 1 & 2.

The Dabhol plant, under the new leadership of RGPPL, was far from without troubles. The plant was shut down in July 2006 because of the lack of naphtha supply. It was later shifted to LNG fuel in April 2007, with Qatar-based RasGas as the LNG supplier to the plant.

“The combined cycle Dabhol power plant with its township spreads across an area of 1,565 acres.”

The LNG-based plant, however, suffered several breakdowns of its key equipments. A long-term service agreement worth INR 6bn ($108m) with GE was signed in 2009 to revive the generating units of the plant.

The plant became capable of operating at 100% of its installed capacity in 2010, following the repair works.

As of 2012, RGPPL had invested INR 38bn ($689m) in setting up additional infrastructure for the project since 2005, with plans for further investment in future on the Dabhol LNG terminal.

The plant is still not operating at its full capacity because of the shortage of gas supply. It produced just 11,000 million units of electricity in 2011-2012.

The 1,147.5MW Sugen combined-cycle power plant at Akhakhol in Gujarat, India, was commissioned in August 2009.