Expand
Davis-Besse Nuclear Power Station is located in Ohio, US.
The Davis-Besse plant comprises one pressurised water reactor with an output capacity of 889MW. Image: courtesy of Bankbryan.
A 6in-thick erosion was identified on the reactor vessel head in March 2002.
Two new 74ft-tall steam generators being transported to the Davis-Besse nuclear power plant. Image: courtesy of First Energy Corporation. 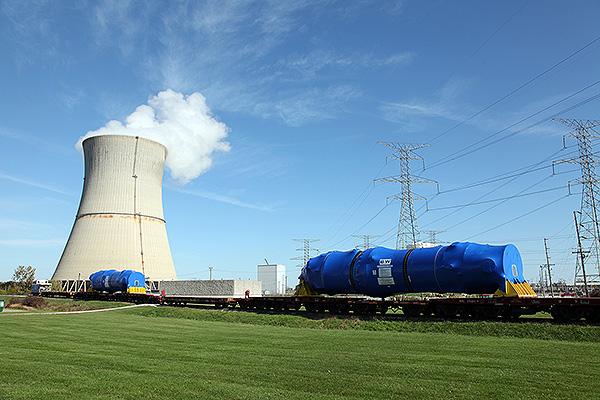 The 894MW Davis-Besse Nuclear Power Station produces approximately 40% of the total power consumed by the north-western region of Ohio state.

It is located on the south-east shore of Lake Erie, about 16km north of Oak Harbor, Ohio.

Construction of the facility began in 1970 and grid connection was achieved in 1977, with commercial operations starting in July 1978.

Cleveland Electric owns 51.4% stake in the plant, while Toledo Edison holds the remaining 48.6%. FirstEnergy Nuclear Operating Company (FENOC), a subsidiary of FirstEnergy Nuclear operates the plant. The operating license is scheduled to expire in April 2017 and FENOC is in the process of renewing it.

The power station will be shut down from January 2014 as part of a refuelling and maintenance outage. FENOC will install two new steam generators and conduct refuelling and other scheduled maintenance works at the plant. The generators will function as heat exchangers producing the super heated steam required for electricity production.

Arkansas Nuclear One (ANO) is a two-unit pressurised water reactor (PWR) power plant located in the west of Russellville in Pope County.

The reactor was designed based on ‘Defence-in-depth’ concept, which involves the installation of barriers between the radioactive heat-producing core and the outside environment. It comprises three major equipments: reactor core, carbon steel vessel, and steel containment structure.

The reactor core helps in retaining the radioactive material in uranium oxide and is placed within a six-inch thick carbon steel vessel. The vessel contains highly pressurised water to cool the radioactive heat-producing core.

The reactor vessel and other components are enclosed within a steel containment in a concrete building. The set up prevents the release of radioactive material and protects the reactor from external hazards.

The pressuriser contains heaters for raising the water temperature within the reactor, and water sprays for condensing the steam volume and lowering pressure. The hot pressurised water is transferred to the steam generator via pipes, which is converted into steam to drive the turbines for generating electricity.

"The most recent temporary shutdown at the plant occurred in October 2011 upon identification of a major hairline crack on the concrete shield building around the containment vessel."

A disruption in the feed water system caused the shutdown of the plant for the first time in September 1977. It resulted in the opening of a pressuriser valve, which the US Nuclear Regulatory Commission (NRC) as one of the most serious nuclear accidents of those times.

In March 2002 an erosion of six-inch thickness on the carbon steel reactor was identified, which caused the leakage of borated water. If not identified, the leakage would have created a mass loss-of-coolant accident, and would have damaged the control rod drive mechanism. The plant was re-opened in 2004 after fulfilling the NRC’s safety measures.

Cracks were identified on 24 of the 69 control rod drive nozzles during a refuelling outage in March 2010, which could have led to leakage of boric acid. Operations at the plant were restarted in 2010, after repairing the nozzles.

The most recent temporary shutdown at the plant occurred in October 2011 upon identification of a major hairline crack on the concrete shield building around the containment vessel.

Babcock and Wilcox were contracted to manufacture two new 74ft tall steam generators for the nuclear power station. The generators were manufactured at the company’s Cambridge facility and shipped through Lake Erie. Final delivery was made in October 2013. The same company had supplied the 879MW pressurised water reactor to the power plant.

Bechtel was awarded the engineering, procurement and construction (EPC) services contract in October 2009, to replace the steam generators and the reactor pressure vessel closure head.