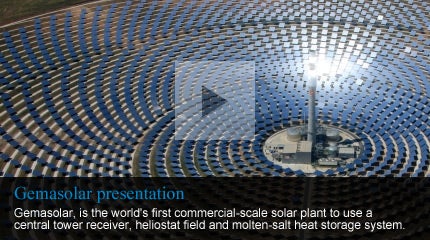 Gemasolar is a 19.9MW, small scale concentrated solar power plant (CSP) located in the city of Fuentes de Andalucía in the Seville province of Spain. It is the world’s first commercial-scale plant to use solar technology comprising of the central tower receiver, a heliostat field and a molten-salt heat storage system. It was officially inaugurated in October 2011.

The plant will produce 110GWh a year and supply clean energy to 25,000 homes while reducing carbon dioxide emissions by more than 30,000t a year.

The Gemasolar CSP plant has 2,650 heliostats spread over 185ha of land. Each heliostat has 400ft2 of steel metal stamped surface and is installed in an array around the central tower equipped with a central receiver. The tower is 140m tall.

The cold and hot storage salt tanks are installed at the ground level and directly connected to the tower. They have capacity to store salts for 15 hours.

The cold tank stores molten salt (sodium and potassium nitrates) at 290ºC and the hot storage tank stores the salts at 565ºC. Both the tanks are made up of steel. The largest tank measures 23m in diameter and 14m in height.

The solar radiation falling on the heliostats is reflected on to the central receiver. The heliostats concentrate the solar radiation at 1000:1 ratio and are controlled through a communication network comprised of 26 fibre optic rings. They are also with geared motors that automatically turn the surface towards the sun.

The receiver is capable of absorbing 95% of the radiation transmitted to the molten salts in the central receiver.

Cold salt is pumped up to the top of the tower at the central receiver, where it gets heated up. The liquid salt is carried back to the hot storage tank where it is stored at 565ºC. Salt from the hot storage tank is transferred to the heat exchanger through pipes and condensed to form steam. This steam is used to run the turbine and produce electricity.

Excess heat during the process is stored in the molten storage tank and is used to generate electricity in the absence of sun’s heat and radiation.

Gemasolar power plant is the flagship project of Torresol Energy Investment. The plant broke ground in February 2009 and was connected to the grid in April 2011.

The estimated cost of the project was €171m and was financed by financial institutions including European Investment Bank (EIB), Banco Popular and Banesto ICO.

The civil works and technical assistance, such as power limitation verification, construction progress audit, commissioning and start-up, were provided by SGS.

The cold and hot storage tanks were constructed by Outukumpu in collaboration with Emypro of Barcelona. The Nordbloc.1 gearmotors were supplied by Nord Drivesystems.

Schneider Electric and Hirschmann Electronics together built the communication network at the project site.

The heliostat or the flat mirrors reflect solar radiation on to the receiver located on top of the tower. They are positioned on the ground with the help of Sensol technology that automatically turns the surface of the mirrors towards the sun light.

The heat storage system permits the power plant to generate 1.5 to three times more electricity than any other renewable sources. The molten-salt tank stores the surplus heat produced during solar radiation, enabling the power plant to operate 24×7.

Power from the plant is carried to a substation in Villanueva Del Rey in Andalusia through a high tension wire from where the power is transmitted to the national grid owned by the Seville Electricity Company (ENDESA).

Unable to produce power at night or during cloudy patches, solar is still fighting profitability issues. A new generation of concentrated solar power plants and nano-antennas, which capture residual heat, are set to tackle the issue and could revolutionise the industry in the near future. Elisabeth Fischer reports.