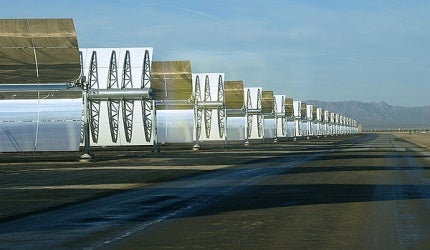 The 250MW Genesis Solar Energy Center located in Riverside County, California, US, had its dedication ceremony in April 2014. NextEra Energy Resources, a subsidiary of NextEra Energy, owns and operates the energy centre, which produces enough electricity to power 88,000 Californian households.

The centre is spread over 1,950 acres in a land administered by the Bureau of Land Management (BLM), approximately 25 miles west of the city of Blythe, in an undeveloped area of the Sonoran Desert.

Development of the solar project began in 2007 and NextEra received the license from the California Energy Commission (CEC), as well as the right-of-way grant from the BLM in 2010.

Construction started in January 2011, but was interrupted twice, firstly by archaeological findings at the site in 2011 and in 2012 by a monsoonal desert storm. The project employed approximately 1,700 workers during the construction phase.

The two generating units of the plant became operational in November 2013 and March 2014 respectively.

The Californian CSP plant uses over 600,000 Flabeg (RP3) parabolic-trough-solar thermal collectors that capture and concentrate sunlight to heat synthetic oil. The heated oil is used to create steam by heating water, while the generated steam is then piped to drive the steam turbines for electricity generation.

The plant consists of 1,840 SenerTrough solar collector assemblies (SCAs), assembled in 460 loops. The heat-transfer fluid (HTF) used at the plant is Therminol VP-1, provided by Solutia.

A dry cooling method, with an air-cooled condenser system, is used to convert the used steam into water and reuse it for the power generation process. The outlet temperature of the solar field is 740°F.

All the power produced by the plant is sold to the Pacific Gas & Electric Company under a long term power purchase agreement.
The power station is tied into the Blythe Energy Project transmission line via a 6.5 mile-long 230kV transmission line and then interconnected with the 500kV Devers – Palo Verde No. 2 transmission line at Edison’s Colorado River substation near Blythe.

Financing of the project

A partial loan guarantee of $852m was issued by the US Department of Energy under the Financial Institution Partnership Programme (FIPP) in August 2011.

Tetra Tech handled the two-year permitting process for the project by preparing supporting documents and coordinating with CEC and BLM. It also managed the environmental construction compliance phase.

“The two generating units of the plant became operational in November 2013 and March 2014 respectively.”

The environmental benefits delivered by the project include the offsetting of approximately 393,000t of carbon dioxide a year, which is equivalent to removing over 84,000 passenger vehicles off the road, according to the estimates from the US Department of Energy.

The dry-cooling method used at the plant is believed to reduce groundwater usage from 1,600 acre-feet to 200 acre-feet annually.