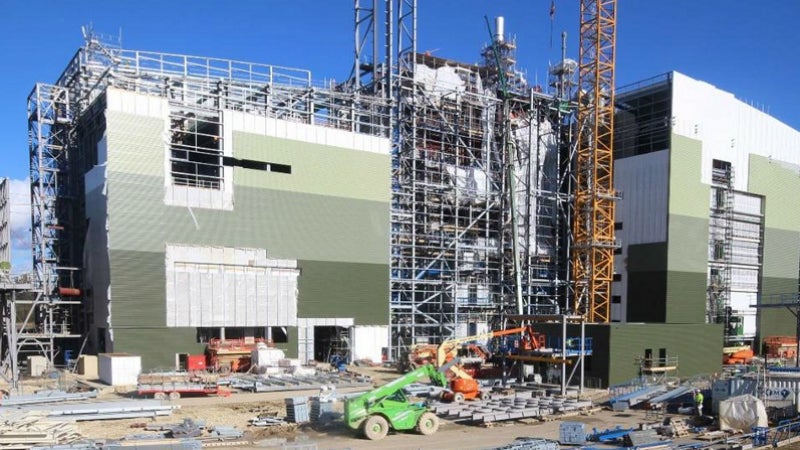 The Greatmoor energy-from-waste (EfW) facility is located in Greatmoor, near Calvert, approximately 2km east of the village of Edgcott, and 11km south of Buckinghamshire, UK.

The EfW plant is owned by Buckinghamshire County Council and was developed by FCC Environment. The engineering, procurement and construction (EPC) contractor for the project was Hitachi Zosen Inova (HZI), who has been retained to operate and provide maintenance services for the plant for a term of 30 years.

The overall investment in the EfW project was estimated at CHF210m ($213.5m), which was met through borrowings.

The Greatmoor EfW facility has an annual waste handling capacity of 300,000t, a maximum thermal capacity of 102MW, and a power generation capacity of 22MW, capable of serving 36,000 households.

The power plant is also designed to generate 6.6MW of thermal energy, capable of meeting the heating requirements for roughly 660 households. It generated 300 jobs during the construction phase and 46 permanent jobs for overseeing the plant’s operations.

The plant is expected to generate approximately £2.3m a year for the local economy and £150m over its 30-year design life.

Greatmoor EfW plant is primarily equipped with a Hitachi Zosen Inova grate measuring 10m-long and 12m-wide, a five-pass boiler with a steam pressure of 52bar and steam temperature of 402°C, a condensation turbine, a transformer, and grid connection facilities.

Other associated facilities include a feed hopper, a ram feeder, primary and secondary air fans, and flue gas recirculation facilities.

The plant’s waste delivery and storage facilities include a tipping hall, a waste bunker and a waste crane. The EfW facility is also equipped with auxiliary conveyers and tanks for residue handling.

“The plant is expected to generate approximately £2.3m a year for the local economy.”

The municipal and commercial waste from the neighbouring communities is conveyed to two dedicated waste transfer stations (WTS) and further transported to the project site by trucks.

The main construction works were subcontracted to Sir Robert McAlpine by the EPC contractor, whereas the architect for the project was RPS Group and the structural engineer was URS Group.

Automation solutions for the project were supplied by Metso, and Changlei Corporation. The former supplied its proprietary DNA automation system, a DNA information management system, and a safety system for the power plant.

Heat Mat was contracted to supply and install a ramp for the entrance to the waste reception hall. The ramp incorporates the company’s slab heating system to facilitate transportation in any weather conditions.

The construction contract for the access road was awarded to Jones Bros.

Permasense is the world leader in integrity monitoring systems, particularly...

HL Insulation offers services in the fields of heat and...

Sureclean provides industrial cleaning and waste management solutions to the...