The 300MW Green Pastures Wind Project in North Texas will be built in two phases of 150MW each.
The first turbine of the wind farm was installed in October 2014.
The onshore wind power project will use 100 ACCIONA AW 116/3000 wind turbines of 3MW capacity.
The first phase of the project is expected to be commissioned in March 2015. 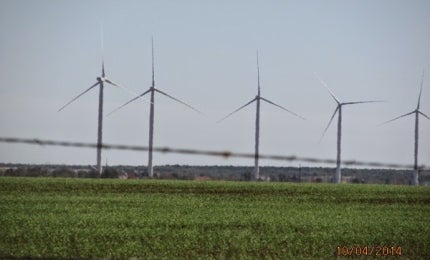 Green Pastures Wind is a 300MW onshore wind farm being constructed in Baylor and Knox Counties, North Texas, US. It will be built in two phases of 150MW each, spread over 18,000 acres in total. It will generate enough clean electricity to power approximately 110,000 homes when fully commissioned in 2015.

Capital Dynamics owns three wind farms in the UK, while Green Pastures is its first wind project in the US.

The project will use 100 ACCIONA AW 116 / 3000 wind turbines of 3MW capacity each, including 50 turbines each in the first and second phases, which will be operational in March and June 2015, respectively.

The wind farm will mitigate 813,000t of greenhouse gas emissions annually, which is equivalent to taking 170,000 passenger vehicles off the road each year.

Capital Dynamics in partnership with Prudential Capital Group achieved financial closure for the first phase of the Green Pastures wind project in October 2014.

Transmission and distribution of power

The power will be sold to the Electric Reliability Council of Texas, the main power grid operator in Texas, under a long-term power purchase agreement with a major financial institution.

“The power will be sold to the Electric Reliability Council of Texas, the main power grid operator in Texas.”

Three-bladed horizontal axis wind turbines of AW 116 / 3000 from ACCIONA will be mounted on 92m-high steel towers. Each turbine with a 116m rotor diameter will provide a swept area of 10,568m². The maximum sound level of the turbine will be 107.4 A-weighted decibels (dBA).

The cut-in and cut-out wind speeds of the power pitch-regulated variable-speed turbine are 3m/s and 25m/s, respectively. The turbine can operate at temperatures ranging between -30ºC and +40ºC.

Spanish wind turbine manufacturer ACCIONA Windpower is the turbine supplier for the Green Pastures project. It will also be responsible for the operations and maintenance of the turbines for a period of 10 years.

SgurrEnergy, a company headquartered in the UK, is the owner’s engineer during the construction phase. IEA Renewable Energy has been hired as the balance of plant contractor.

Texas, the biggest electricity producer and consumer in the US, also leads the way in wind power generation. It has a wind power generating capacity of more than 12,000MW, which accounts for more than one-fifth of the total wind energy generation in the country. The state generated approximately 36 million megawatt hours of wind power in 2013.