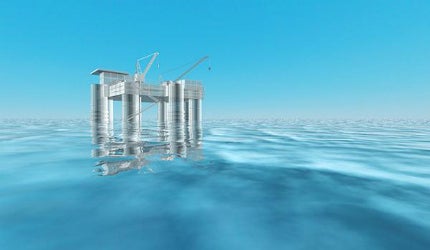 A 10MW ocean thermal energy conversion (OTEC) prototype power plant has been planned off the coast of Hainan Island in southern China. The pilot project will be jointly developed by the Beijing-based resort developer Reignwood Group and the US-based defence and aerospace company Lockheed Martin. A memorandum of agreement was signed between the two companies for this in April 2013.

The construction of the offshore power plant is expected to start in 2014. Scheduled for completion in 2017, it will be world’s largest ever OTEC facility.

OTEC technology is still in early stage of development, although was originally invented towards the end of 19th century. The Hainan OTEC Power Plant designed by Lockheed Martin will mark the beginning of commercial deployment of this technology.

“The plant will be configured as a closed cycle OTEC system.”

The tropical Hainan offshore was identified as an ideal location for the OTEC plant. The plant will be configured as a closed cycle OTEC system.

Turbine systems of the plant will be placed above the water surface, with warm water passing through the heat exchanger and boiling the working fluid of ammonia to create steam.

The steam then passes through the underwater heat exchanger to be condensed into liquid ammonia. Cold water is pumped from 800m to 1,000m below the ocean surface.

The system will operate with the cyclical process of boiling and cooling the working fluid in a closed loop.

The electricity generated by the plant will be supplied to a resort, which will be built by the Reignwood Group in Hainan Island. The entire electricity needs of the resort community will be met by the OTEC plant. The resort will be marketed as a low-carbon real-estate development.

The Three Gorges Dam Project (TGP) is the world’s largest hydropower complex project located in one of the three gorges of the Yangtze River, the Xilingxia Gorge in Hubei province, China.

The OTEC technology is based on the difference in temperature between the warm surface water and the cold deep water of the ocean. A minimum thermal difference of 20°C is needed for the viable operation of an OTEC system.

The power system operates as a cyclic heat engine. Warm water passes through a heat exchanger to generate steam for driving the turbine. The steam is condensed into liquid with the cold water drawn from the ocean’s depths.

An OTEC plant can be land-based, shelf-based or offshore.

The configuration of an OTEC heat engine can be either open cycle, closed cycle or hybrid. In the open cycle OTEC system, the steam is directly generated from warm sea water by pumping it into a low-pressure container.

In the closed cycle system, a working fluid having low boiling point, such as ammonia, is used to create the steam. The fluid gets vaporised with the passage of warm water through the heat exchanger. The cold sea water is pumped through another heat exchanger to condense the vapour back into working fluid.

The hybrid cycle system represents a combination of both closed and open-cycle system features.

The Future of OTEC in China and USA

“The Hainan OTEC pilot plant will pave the way for an increasing number of commercial deployments ranging between 10MW and 100MW capacity off the coast of southern China.”

The Hainan OTEC pilot plant will pave the way for an increasing number of commercial deployments ranging between 10MW and 100MW capacity off the coast of southern China, under the joint effort of Lockheed Martin and Reignwood Group.

The prototype plant will provide a learning environment for further technological innovation in the field of OTEC to increase efficiency and bring down the capital cost.

The US Navy and the Makai Ocean Engineering will closely watch the Hainan OTEC plant development.

In the US, Hawaii and Florida have been identified as potential sites for commercial application of OTEC technology.

Lockheed Martin will look for long-term partners to develop commercial scale OTEC plants in the US.