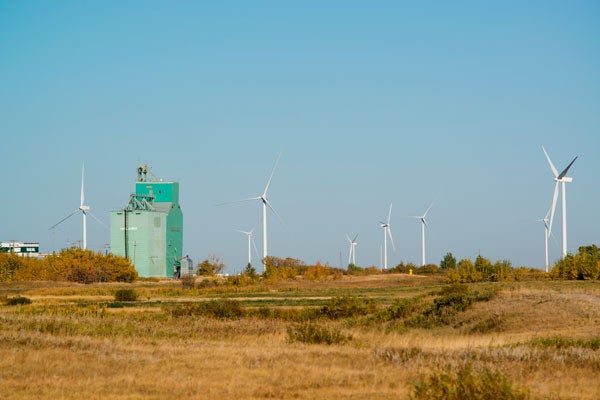 The 150MW Halkirk wind farm is located at Alberta, Canada. It is the single largest wind-power project in Alberta and generated its first electricity in November 2012. It became operational in December 2012.

The wind project produces energy required for up to 50,000 homes, based on an average household energy usage of 1,000kWh per month. It is expected to reduce 5.4 million tonnes of greenhouse gas emissions.

The Halkirk wind project is developed in 15,000 acres of private land in Paintearth County. The project comprises of 83 turbines of Vestas V90 model with a generation capacity of 1.8MW each.

The Vestas turbine includes a wind sensor at the top of nacelle for determining the wind speed and direction. The turbine is attached with three 44m long blades with a swept area of 6,362m².

Each turbine tower at Halkirk is 80m high and weighs 160t. It is connected to a supervisory control and data acquisition (SCADA) system which is monitored by an automated remote operations centre.

“The Vestas turbines require a minimum wind speed of 11km/h to operate.”

The Vestas turbines require a minimum wind speed of 11km/h to operate and are attached with an automatic system that shuts down the turbines when the speed exceeds 90km/h. The automatic shutdown system helps to avoid damage to the turbines due to changes in wind level. The average speed required for the power generation is 60km/h.

The Halkirk substation 615S is located in Fourth Meridian, Paintearth county. The approvals for the power facility were granted by Alberta Utilities Commission in July 2010, and the substation was approved in August 2010. The construction of the substation was completed in October 2012.

The construction of Halkirk wind project commenced in March 2012. The project created approximately 270 jobs during the construction phase and 18 permanent jobs for the maintenance and operation.

The Halkirk telecommunications upgrade project was developed to connect the wind project and the Jarrow Substation which located is nine miles north-west of Irma. It included the installation of a 30m tall telecommunications tower.

The construction activities also included that of the Tinchebray 972S substation, which is a 240kV switching station. It acts as the connecting point and transfers the power from the Halkirk substation to the power grid.

Sale and transmission of wind power generated at the Halkirk

Electricity is generated by the three-phase generator present in the nacelle and is converted by a transformer. The power generated in the turbines is transmitted to the substation at the project site through the underground cables.

The balance of plant contract for the $375m Halkirk Wind Project was awarded to Renewable Energy Systems Canada. Vestas provided 83 wind turbines for the project.