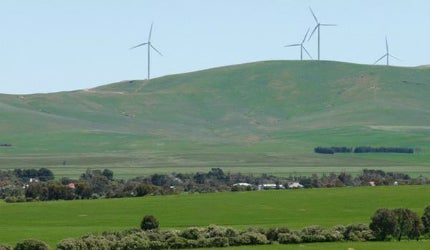 Hallett 5 is a 52.5MW onshore wind farm built over the Porcupine Range in South Australia. It is situated about 10km north-west of the town of Hallett and 25km south-east of Jamestown.

It is also known as Bluff Wind Farm as it is located near the Bluff Mountain Range. The facility was developed by AGL Energy, a renewables development company, with an investment of $129m.

“The wind farm produces 159GWh of clean energy annually, which is enough to power around 26,600 households."

AGL Energy sold the wind farm to Eurus Energy on 14 May 201, for $145m. AGL will operate, maintain, and retain the rights to all large-scale generation certificates (LGCs) and electricity output of the plant until 2036.

The wind farm produces 159GWh of clean energy annually, which is enough to power around 26,600 households. It saves around 161,000t of greenhouse gas (GHG) emissions a year.

Hallett 5 is the fifth wind farm developed by AGL near Hallett; the earlier ones being Hallett 1, 2, 3 and 4. Hallett 1, 2 and 4 are operational, while Hallett 3 is experiencing delays due to local protests and the project’s prolonged pending approval by the Supreme Court.

The total swept area of the wind farm is 37.5 acres, with each turbine having a swept area of 1.5 acres. Nearly 2km of high tension cables have been used for the rock-anchor footings and some 9km of underground cabling work has been done. The towers were built using 14,760t of steel.

The Canunda Wind Farm was developed by Canunda Power and Infigen Energy at Lake Bonney near Millicent, South Australia.

Suzlon Energy was the turnkey contractor for the Hallett 5 wind farm. The company was responsible for the engineering, procurement and construction (EPC) delivery of the project.

Under the contract, REpower, which is part of Suzlon Energy, carried out the detailed design, manufacture and installation of the turbines and associated infrastructure of the wind facility. It has also designed and installed a 33kV main transformer and 275kV substation for the project.

In addition, it has further provided an integrated SCADA system. The contract was valued at $120m.

Construction on Hallett 5 began in July 2010 and it was operational by September 2011. Practical completion was achieved in March 2012 and the project created more than 120 construction jobs in the region.

The wind farm has helped the federal government achieve the renewable energy target of 20% electricity generation from renewable sources by 2020.

The total amount of carbon released during the construction of the project is balanced in the first six months of operations.

Planning and development of the project was permitted in November 2004.

“South Australia has an installed wind power capacity of 1,880MW."

Australia has diverse renewable energy industries and supports the nation with nearly 8%-10% of the total power supply. The Australian Government has introduced mandatory renewable energy targets of electricity supply by 2020.

According to an independent study released by AGL, South Australia is getting closer to 1,000MW and some $2bn of investment in wind power generation.

In September 2010, wind power generation in the country was 4,985GWh, which represented 2% of the total and 23% of the renewable electricity generation. South Australia has an installed wind power capacity of 1,880MW.

A 10GW carbon market economics report project of wind power by 2016 is achievable if the nation meets the renewable energy target.