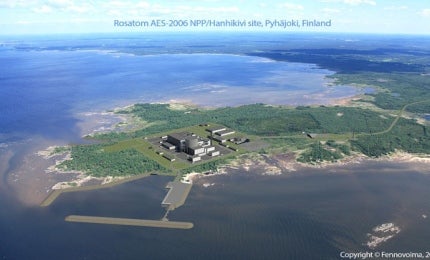 Hanhikivi 1 is a planned nuclear power plant in Pyhäjoki in northern Finland. Finnish nuclear power company Fennovoima is the developer.

The nuclear facility will consist of a 1,200MW pressurised water reactor and will be built by Rusatom Overseas, a subsidiary of the Russian state-owned nuclear corporation Rosatom.

Electricity will be sold to Fennovoima’s owners at cost price. Voimaosakeyhtiö SF owns 66% of Fennovoima, with RAOS Voima, Rosatom’s Finnish subsidiary, a minority stakeholder with 34%.

Construction of the power plant is scheduled to begin in 2018 and the production should start in 2024.

"The plant is located in the coastal municipality of Pyhäjoki."

Fennovoima was established in June 2007 to plan and construct a new nuclear power plant in Finland. The company carried out an environmental impact assessment (EIA) in 2008 and the Finnish Government granted a decision-in-principle for construction of a 1,800MW nuclear power facility in May 2010.

Site selection was completed in 2011 and the plant supplier was contracted in 2013. After the plant’s design was changed to a 1,200MW VVER, Fennovoima conducted further EIAs in 2013 and 2014.

Finland’s parliament voted in favour of the project in December 2014 and the construction licence application will be submitted to the government in June 2015 with approval expected by 2017.

The plant is located in the coastal municipality of Pyhäjoki on the shore of the Baltic Sea in Northern Ostrobothnia, Finland. It is named after the Hanhikivi Peninsula where the site is located.

Pyhäjoki has solid bedrock, which allows for easier excavation and stronger building structure. It also has lower seismic design values. Due to the plant’s proximity to the ocean, cooling water and discharge location are easily available.

In addition to technical feasibility, the willingness and small population among the regional community were factors behind the decision.

Construction of the Finnish Olkiluoto 3 1,600MWe nuclear power plant reached a milestone on 22 June 2010, after installation of the reactor pressure vessel in the reactor building.

The plant will be equipped with a 1,200MW AES-2006 pressurised water reactor. It is a third generation evolution of the Russian VVER reactor designed by Gidropress, a subsidiary of Rosatom.

The reactor has a maximum thermal power of 3,200MW and service lifetime of 60 years. It will be built to meet the latest Finnish safety requirements.

A light-water reactor will feature a double-shell containment building with a thick outer containment shell made of reinforced concrete that can endure high collision loads such as an aeroplane crash.

The reactor core will contain 121 control rods and the containment building will be equipped with a core catcher to prevent the core material from escaping in case of an accident.

Emergency diesel generators, a back-up power plant and multiple connections to the national grid will secure the plant’s power supply.

Reprocessed uranium will be used as fuel during the initial years of operation. The spent nuclear fuel generated in the plant will be stored in separate interim on-site storage facilities.

The final disposal of the spent nuclear fuel will begin in the 2070s at the plant’s own final disposal facility, although it could be managed by Posiva waste repository.

Preliminary infrastructure work began in mid-September 2014 with the construction of a new 4km-long two-lane access road from highway 8 to the border of the plant site.

Approximately 3,000 to 4,000 employees of different nationalities will work at the Hanhikivi 1 site.

Fennovoima and Rusatom Overseas signed an engineering, equipment supply and turnkey construction contract on 21 December 2013 for the delivery of the power plant. As part of the contract, Atomproekt was hired by Rusatom Overseas in October 2014 to develop the design and licencing documentation for the project. The design of the nuclear plant will be customised to comply with Finnish regulations in order to obtain the construction licence.

Russian nuclear fuel company TVEL signed a ten-year contract worth €450m ($521m) with Fennovoima on 26 December 2013 for the nuclear fuel supply, fuel management and design, as well as licencing and personnel training services. TVEL will ship TVS-2006 fuel cartridges for the first core and for ten years of operation with an option for renewal.

Siemens was contracted on 25 June 2014 for the electrification of the construction site.

Meanwhile, Suomen Maastorakentajat Oy was awarded a €5m ($5.8m) contract by Fennovoima in September 2014 to construct the Hanhikivi access road, the water supply piping and domestic wastewater sewer for the plant site.

A consortium formed by ÅF-Consult Oy and M+W Group was selected as the consulting partner for project management, nuclear safety, licencing and auditing of the subcontracting chains.

Nuclear power is the biggest source of electricity in Finland and accounts for approximately 27% of the electricity generated.

The first nuclear reactor was set up in 1977. As of January 2015, Finland has four reactors in operation, including two in Loviisa in Southern Finland and two in Olkiluoto on the west coast.

A fifth reactor is under construction in Olkiluoto and two more are planned, including Hanhikivi 1.