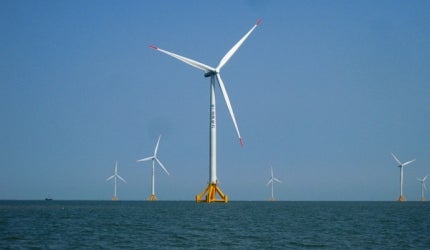 The construction of the offshore wind power project started in June 2011. It is being carried out in two phases. The first phase with an installed capacity of 100MW was completed by the end of 2011 and the 50MW second phase was completed by November 2012.

The developers of the project assert that the plant is capable of generating about 375m kWh of electricity per year while reducing 247,000t carbon dioxide emissions and saving 97,000t of standard coal.

The wind farm is being showcased as a reference for Chinese prowess in offshore wind power technology and an innovative model for nationwide wind power development across the Chinese Sea in the future.

The 150MW Jiangsu Rudong project was approved by the National Development and Reform Commission of China in December 2010 following the successful completion of a 32MW Offshore Pilot Wind Farm in the intertidal zone off the coast of Rudong.

Construction on the 150MW project started in June 2011. The 32MW pilot project had taken 16 months to complete construction, whereas the 100MW phase I and the 50MW phase II of the Jiangsu Rudong project took just five months and four months respectively to complete.

Grid connection for all of the turbines was completed in September 2012.

The Rudong Offshore wind farm is situated in an intertidal area of East China Sea, approximately 3km to 8km away from shore. The location becomes dry with low tide but is covered by up to five meters of water at high tide. The location advantages of the wind farm include shallow water zone and good wind condition.

The 50MW phase II was installed with 20 Goldwind wind turbines each rated 2.5MW with rotor diameter of 100m.

Thornton Bank is the first offshore wind farm to be constructed in Belgium. It is located in the North Sea, about 30km off of the Belgian coast.

Wind power, followed by thermal power and hydropower, is the third largest electric power in China accounting for 1.5% of China’s total power generation. It is being promoted as a crucial non hydraulic renewable energy source with far-reaching potential for the country. The national energy policy of China envisages a total installed capacity of 100GW of wind power by 2015.

As many as 10 offshore wind power projects are scheduled to be started in 2013 including another 150MW Offshore Wind farm in the Rudong county and the 116.6MW Shanghai Donghai Bridge (phase II) Offshore Wind Farm.