Expand
Statkraft’s Knapsack II CCGT power plant is located in the Knapsack Chemical Industrial Park at Hürth, Germany.
The 430MW Knapsack II power plant will supply electricity to more than 500,000 houses in Germany. Image courtesy of Siemens.
Siemens provided the turnkey facility and the required machinery for the $492m project. Image courtesy of Siemens.
The gas for Knapsack II is obtained through the gas supply line 400/PN100 Wesseling-Hürth DN at the Keldenich point. 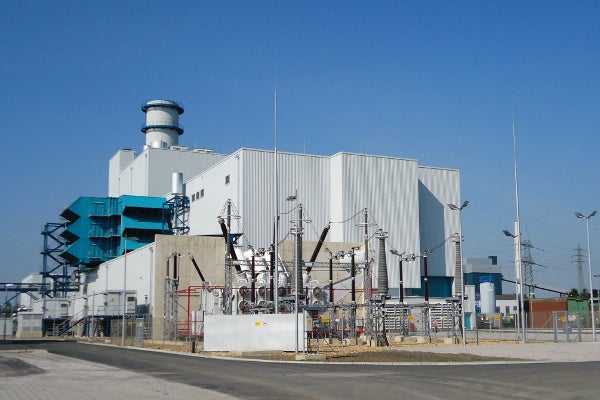 The Norwegian electricity company, Statkraft, began operations at its new 430MW Knapsack II combined cycle gas turbine (CCGT) power plant at Hürth near Cologne, Germany, in June 2013. The plant is located in the Knapsack Chemical Industrial Park and was built at a cost of $492m.

Knapsack II is an extension of the Stratkraft’s 800MW Knapsack I CCGT power plant. Both the plants will now be treated as a single unit and the cash flows will be combined. The new plant has a power generation efficiency of 60% and will provide electricity to approximately 500,000 houses.

"The new plant has a power generation efficiency of 60% and will provide electricity to approximately 500,000 houses."

Siemens was the engineering, procurement and construction (EPC) contractor for Knapsack II.

Statkraft obtained permission for the construction and operation of the Knapsack CCGT power plant expansion in July 2011.

The turnkey facility was developed by Siemens, who supplied a SGT5-4000F gas turbine and SGen5-2000H electrical generator for the plant.

The power plant design includes a single shaft configuration installed with a self synchronising clutch. The gas and steam turbines are arranged on one shaft and drive the same generator. The configuration provides the advantage of lower investment and higher operational flexibility.

The plant reaches the full load in few minutes using the hot-start mode, which helps in compensating for the power loss caused by electricity fluctuations.

A natural gas supply line DN 400 of 13.2km length was connected to the gas supply no.79 Stolberg-Porz 300 at Keldenich point, in order to enable the supply of gas to Knapsack II.

The power plant is connected to the Amprion grid through underground cables.

"The turn down upgrade system of the turbine reduces the compressor mass flow at part load with lower carbon monoxide emission levels."

The turn down upgrade system of the turbine reduces the compressor mass flow at part load with lower carbon monoxide emission levels. It also increases the combined cycle efficiency in part load operation and reduces the cost of fuel consumption during negative spark spread operations.

The construction works at Knapsack II began in August 2011. The works were executed in two parts. The main power plant construction formed the first part, while the second part involved the natural gas supply line.

The construction of the plant involved setting up of a machine house, heat recovery steam generator, a transformer park, feed water pump building and a cooling tower.

The natural gas supply line 400/PN100 Wesseling-Hürth DN was constructed along with two pigging stations, and a gas measuring and controlling station at Keldenich.

Konecranes UK supplied two cranes for the turbine hall construction, under a contract with Siemens.

The contract for the construction of DN 400/ PN 100 connection line was awarded to Friedrich Vorwerk. The contractor performed the planning and material procurement, along with the turnkey installation works for Wesseling/ Hürth gas supply line.

Siemens sub-contracted the steelwork to Zublin Stahlbau. The subcontractor was responsible for design of the workshop, structural steelwork manufacture and erection, and supply and installation of the cladding.

InterGen to Construct 900MW CCGT Plant in the UK

InterGen has received approval from the UK Department of Energy and Climate Change to construct a 900MW London Gateway Logistics Park in Essex, the UK.