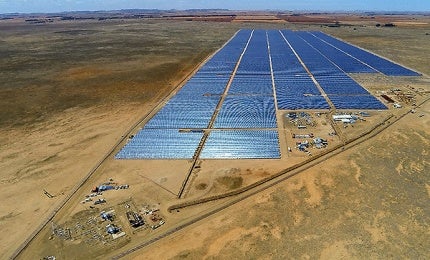 Construction of the Letsatsi plant began in February 2013 and the commercial operations are expected to start in mid-2014. It will generate approximately 100 to 250 construction jobs and ten to 30 permanent operations and maintenance positions during its lifespan of 25 years.

“Construction of the Letsatsi plant began in February 2013 and the commercial operations are expected to start in mid-2014.”

Together, the Lesedi and Letsatsi plants are expected to produce approximately 150,000MW-hours of electricity, which would be enough to power 50,000 homes.

A consortium of SolarReserve, Kensani Group and Intikon Energy is executing the project, as well as the Lesedi and Jasper projects.

The Letsatsi project is located 35km north-west of Bloemfontein, and will consist of 280,000 poly-crystalline Hanwha SolarOne SF260P-270 photovoltaic solar panels, installed over approximately 300ha. The panels will be 15m² in size and arranged in 1km-long rows.

They will be mounted on metal frames at a tilt angle of 30°, and will have a maximum height of approximately 3m above the ground, supported by concrete or screw-pile foundations.

The rows of PV panels will be connected to an internal electrical collection system. The direct current (DC) output generated will be converted into an alternating current (AC) by an inverter.

Step-up transformers will convert the low voltage AC to a medium voltage, which is suitable for the internal collection system. Electricity will be metered and the substation, located in the north-east of the site, will connect the facility to the national grid.

The construction work will use 4,500t of metal framework.

Lesedi Solar Project is a 75MW solar photovoltaic (PV) power project being developed in Northern Cape Province near the town of Kimberly in South Africa.

South Africa’s state-owned utility Eskom will purchase the entire power from the project under a 20-year power-purchase agreement.

The electricity will be fed to Eskom’s 132kV distribution line running between the Southdrift 132/22 kV substation and the Harvard substation 132kV busbar.

The total investment on the Lesedi and Letsatsi solar power plants is estimated to be R5.15bn ($487m).

Rand Merchant Bank, a division of FirstRand Bank, purchased a preferential-equity share and also acted as the lead arranger and book runner for the debt funding.

The consortium of ACS Cobra, Gransolar and Kensani Energy was awarded the engineering, procurement and construction contract for the Letsatsi solar project, while SgurrEnergy was appointed as the technical adviser.

“Hanwha SolarOne was given the contract to provide solar panels and Raubex was contracted by Gransolar to conduct civil and electrical temporary works.”

Hanwha SolarOne was given the contract to provide solar panels and Raubex was contracted by Gransolar to conduct civil and electrical temporary works. The contract for the erection of lightweight metal structures and PV panels was awarded to Trencon.

South Africa has more than 2,500 hours of sunshine a year, meaning it has huge potential for solar power. The nation has set a target of producing 8,400MW of solar PV energy by 2030 in order to tap into this resource and reduce greenhouse gas emissions.