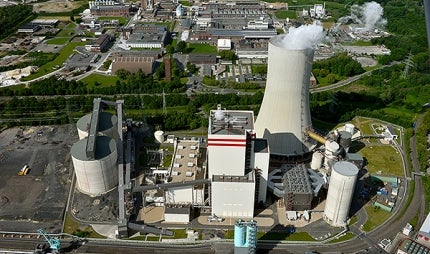 Permission for the construction and operation of the Lünen power plant was received in May 2008 and construction began in September 2008. First power was transferred to the grid in December 2013.

The project involved an investment of €1.4bn (approximately $1.94bn) and is expected to provide clean energy to approximately 1.5 million German houses, offsetting one million tonnes of carbon dioxide emissions annually.

Vattenfall Europe, a subsidiary of Vattenfall, is developing a new hard coal-fired power plant along the Elbe River at Moorburg, Hamburg, Germany.

The plant comprises a SST5-6000 steam turbine set with a gross power output of 813MW. The turbine contains one high-pressure (HP), one intermediate-pressure (IP) and two low-pressure (LP) cylinders. Siemens’ advanced 3DV technology (three-dimensional design with variable reaction levels), installed for the HP and IP blades, optimises the stage reaction and stage loading for each row, and achieves higher HP and IP efficiencies.

Generation and transmission of power

The power plant is estimated to use approximately 240t of coal per hour at full load. Coal is sourced through long-term coal supply contracts and delivered via the Datteln-Hamm Canal.

Coal is transported to the steam generator via conveyor belts and burned in fresh air at 1,300°C temperature. Approximately 2,000t of steam per hour is produced using the feed water in the pipes. The steam is fed into the machine room in the HP turbine and passes through the IP and LP turbines. The four-part steam turbine converts the mechanical energy to electrical energy.

Power generated at the Lünen power plant is transferred to the Amprion transmission network via a 380kV overhead transmission line.

A consortium of Siemens Energy and Trianel Boiler Consortium Lünen (comprising Austrian Energy and Environment (AE&E) and Japan-based IHI) was awarded the engineering, procurement and construction (EPC) contract for the project. Siemens supplied, commissioned and installed the steam turbine generator set, as well as the mechanical and electrical equipment.

The once-through type steam generator and the auxiliary boiler were supplied by Trianel Boiler Consortium Lünen (TBCL), who also supplied the air quality control equipment and the coal feed and ash removal system.

"Permission for the construction and operation of the Lünen power plant was received in May 2008 and construction began in September 2008."

Steag prepared the planning approval documents and specified the EPC services for tendering of the overhead transmission line, in addition to supplying fly ash for the power plant. The contractual scope also included construction supervision and support during the technical acceptance testing process.

Microca was engaged for handling the coal at the plant site. Matsuo Steel Structure, a company based in Shanghai, was contracted to build the 100m-tall structure supporting the steam generator.

The contract for the construction of the 380kV overhead transmission line was awarded to RWE Westfalen-Weser-Ems Netzservice.

Züblin Stahlbau is the supplier of steelwork and conducted cladding and erection works for the powerhouse and boiler house. The contract for disposing the filling material at the power plant site before construction was awarded to REMONDIS ProTerra.

Grontmij was engaged to provide permit application and licensing management services for the power plant. Keibel was awarded the contract for bending the boiler walls.

Bilfinger Piping Technologies designed and installed the high-pressure pipeline system, along with conducting the detail engineering for the power plant.

Eurosilo was awarded the contract for constructing the coal storage silos for the plant.

Enpros was contracted by IHI for conducting overall project management, planning and design for the auxiliary steam generating plant. The contractual scope also included the detail design and material logistics of the piping system for the steam generator.

ESI Eurosilo
When it comes to advanced storage solutions for bulk solids,...
SUBSCRIBED