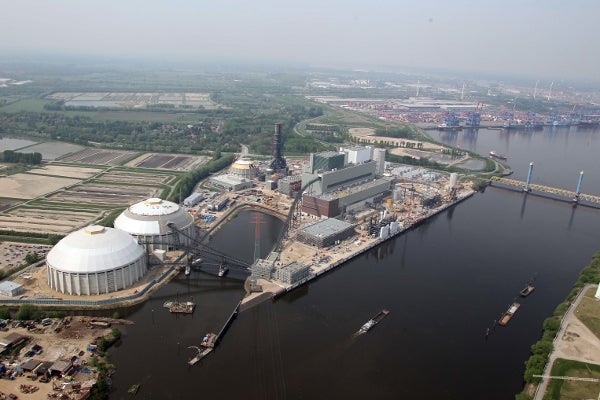 Vattenfall Europe, a subsidiary of Vattenfall, is developing a new hard coal-fired power plant along the Elbe River at Moorburg, Hamburg, Germany. The project involves an estimated investment of €2.8bn ($3.8bn).

The Moorburg plant will have a total installed capacity of 1,654MW, in addition to district heating output of 650MW. It is expected to generate 11,500GWh of electricity annually and will provide clean energy to more than four million Hamburg homes, offsetting 2.3million tonnes of carbon dioxide emissions annually.

Construction of the coal-fired power plant began in 2007 and the first power was transferred to the Hamburg public grid in February 2014. The plant is expected to be fully operational in 2014. It is expected to create approximately 3,000 jobs during the construction phase.

Moorburg is a double-block, hard-coal fired power plant comprising of two 820MW units A and B. It is expected to replace the Wedel cogeneration plant in Hamburg upon completion. It is estimated to consume 480t of hard coal per hour.

With a net electrical efficiency of 46.5% and a fuel utilisation rate of 61%, the plant is expected to be the most modern and environmentally sound hard coal power plant in Europe.

Flue gases from the plant will be purified in three stages. The nitric oxides will be converted into nitrogen and water vapour using ammonia-air mixture, followed by dust removal. Electrostatic precipitators will separate the ash particles in the airflow and the generated ash will be disposed using PROMECON’s MECONTROL UBC system.

The district heating from Moorburg to Hamburg-Altona will be supplied via a 12km-long pipeline.

Generation and sale of power from the Moorburg plant

Coal is delivered to the 600m quayside at the plant site by sea vessels and conveyed to the two covered circular coal stores using tubular belt.

The mechanical energy delivered by the turbine is converted into electrical energy by the generator and transported to the 380kV power grid via a generator transformer.

Steam from the low-pressure and intermediate-pressure sections will be condensed in the heat exchangers. The resultant heat will be used by the city’s district heating supply system.

Under an agreement made in May 2007, Norddeutsche Affinerie will purchase one billion kWh of electricity per annum produced at the Moorburg power plant for 30 years.

The construction of the Moorburg power plant is being undertaken in a phased manner. Major works include the construction of power house, boiler house, three ash filter tanks, coal storage yard, an inlet structure and sprinkler tanks.

Hitachi Power Europe was awarded the contract to supply utility steam generators and firing system, and conduct mechanical engineering works for the Moorburg power plant. Alstom is the supplier of two conventional steam turbine generators of 820MW each.

Züblin Stahlbau was awarded a €22m (approximately $33.7m) contract, in March 2008, to supply the main structural steelwork for the boiler house and adjoining buildings.

Kraftanlagen München was awarded the engineering, supply, fabrication, construction and commissioning contract of the intermediate and low-pressure piping and related auxiliary systems for the two units and for the district heat extraction system. Chemont was engaged to conduct pre-fabrication of pipelines for the new power plant.

Citec Engineering was subcontracted by Kraftanlagen München for providing the piping design of intermediate and low-pressure steam system, and the district heating system.

RAFAKO was awarded the contract for the production and delivery of pressure parts of the supercritical lignite-fired boilers.

Gesellschaft fur Automatisierungstechnik (gat) was engaged to modernise the air-conditioning control for the electrical operating rooms. The consortium of Alpine Bau and Hamon was awarded the circular hybrid cooling tower supply contract.

Keibel was engaged to conduct fitting and welding of the connecting pipes between the collectors and exterior heating surfaces, and boiler walls.