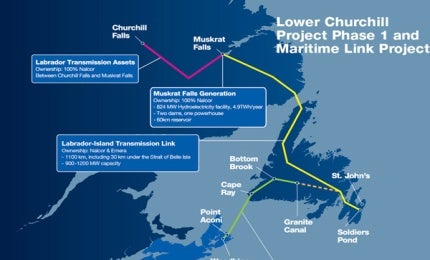 The Maritime Link Project involves the construction of a 500MW (+/- 200kV to 250kV) high-voltage direct-current (HVDC) transmission line stretching from Granite Canal in Newfoundland and Labrador to Woodbine in Nova Scotia, Canada.

The project, which has an estimated investment of $1.56bn, is being implemented by NSP Maritime Link (NSPML), a wholly owned subsidiary of Emera Newfoundland & Labrador Holdings and an affiliate of Nova Scotia Power.

It will enable the province of Nova Scotia to achieve its target of generating 40% of electricity from renewable sources by 2020, and meet the federal requirement of reducing coal emissions by 50% by 2030.

"A final environmental assessment (EA) report was submitted in January 2013 and was approved in June the same year."

A final environmental assessment (EA) report was submitted in January 2013 and was approved in June the same year. The Nova Scotia Utility and Review Board (UARB) approved the project in November 2013, which led to the start of construction in early 2014. Power transmission is scheduled to start in 2017.

In addition, two 230kV alternating current (AC) substations will be installed in Newfoundland, and a 345kV AC substation in Nova Scotia, with two cable transition stations.

The transmission line at Newfoundland will stretch from Granite Canal to Cape Ray, passing through Bottom Brook midway. Ancillary infrastructure at the island will include two switchyards, each located at Granite Canal and Bottom Brook, a converter station at Bottom Brook, a transition compound and an onshore cable anchoring site at Cape Ray, a grounding site to provide a path for stray current, approximately 20km of grounding line, and approximately 2km of underground cable.

The line within Nova Scotia province will start from the landfall site near the thermal power plant and follow the route of an existing underground transmission corridor to the existing Woodbine converter station.

A grounding transmission line will be linked to a grounding facility in north-east Cape Breton County. Ancillary facilities within the province will include a transition compound, an onshore cable anchoring site, a grounding site, and two underground cable sections.

The HVDC power transmission solution for the project will be provided by ABB under a contract worth $400m. The new transmission line will use ABB’s HVDC light voltage source conversion (VSC) technology incorporating a full VSC bipolar configuration.

"The subsea cables spanning the Cabot Strait will be designed, manufactured and installed by Nexans, under a contract worth approximately €175m."

The cables along the Cabot Strait will be laid at depths of up to 470m by the dynamically positioned cable laying vessel C/S Nexans Skagerrak, while the horizontal directional drilling (HDD) method will be implemented at the Point Aconi and Cape Ray landfall sites.

In addition, two parallel boreholes will be drilled at each of the landfall sites and conduits will be placed inside the boreholes, through which the subsea cables will be inserted. Protection for the cables will be provided by using Nexans’ CapJet trenching system and rock installation.

The subsea cables spanning the Cabot Strait will be designed, manufactured and installed by Nexans, under a contract worth approximately €175m (approximately $236m). Engineering and design services for the project are being provided by Hatch.

Up to 19 consulting companies were involved during the preparation of the EA report. The document and information control solutions are being provided by Coreworx.