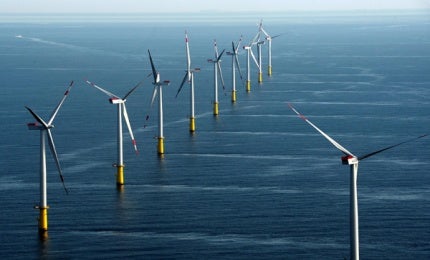 Construction began in August 2012 and the final turbine was installed in April. The project is expected to produce clean energy that will power approximately 360,000 German houses, while offsetting approximately one million tonnes of carbon emissions every year.

WindMW, a joint-venture of Blackstone and Windland Energieerzeugungs, developed the project with an investment of €1.2bn ($1.64bn), making it Germany’s first offshore wind project to be wholly financed by private investors.

The offshore power project is located 23km north of the Helgoland Island in the North Sea, and extends over 42km. It features 80 Siemens SWT-3.6-120 wind turbines with a capacity of 3.6MW each. Each turbine, with a rotor diameter of 120m, stands 149m tall and has an elevation of 89m.

"The project is expected to produce clean energy that will power approximately 360,000 German houses."

The turbines are installed at water depths ranging from 22m to 26m. More than 110km of inter-array subsea power cables and associated terminations, supplied by JDR, are used to link the turbine generators to the offshore substation. The cables, equipped with hang-off termination technology, help in improving the speed and safety of installation, while minimising the vessel on-station time.

More than 85,000t of steel, 48,000m² of offshore coating and 4,200 pieces of shell plate were used to manufacture the monopiles for the project. Ambau manufactured the monopiles and transition pieces at its Cuxhaven and Bremen manufacturing units.

The wind farm is operated and maintained from the new service stations at Heligoland.

Construction of the wind farms

The first phase of construction, involving the ramming of 80 monopiles, was completed in April 2013. The first foundations were transported to the offshore site in September 2012, and the turbine blades were lifted and placed by Seajack’s Zaratan vessel.

Power transmission to the grid

The alternating current (AC) power generated by the wind turbines is transmitted to the offshore substation and further transferred to the HelWin1 offshore platform, developed by Siemens, for conversion into DC current, before transmission to the onshore substation.

Approximately 45km of land cable route was used to connect the offshore platform with the onshore substation at Büttel. The DC power is converted back into AC power at Büttel and is fed into the national grid.

Financing of the project

Financing for the project was provided by a consortium of seven commercial banks, along with EKF, the export credit agency of Denmark, and KfW-Bankengruppe. The consortium consisted of Commerzbank, KfW IPEX-Bank, Bank of Tokyo-Mitsubishi, Dexia, Lloyds Banking Group, Santander and Siemens Bank.

The contract for the supply, installation and commissioning of the wind turbine generators was awarded to Siemens. This included the service and maintenance of turbines for a period of five years.

A consortium of Alstom Grid and WeserWind was contracted for delivering the offshore substation. Alstom Grid was responsible for the design, manufacturing and commissioning of the substation, along with the design and supply of electrical components, while WeserWind designed and manufactured the platform’s steel structure, including a helicopter landing deck and the platform jacket.

"Approximately 45km of land cable route was used to connect the offshore platform with the onshore substation at Büttel."

Ambau signed a deal to construct the monopile sets, while Seajacks was awarded the contract for installing the monopiles, scour and the wind turbine generators. Seaway Heavy Lifting won the contract to install the offshore substation.

The construction of the seabed at the farm site went to Boskalis, while VSMC was awarded the contract to install the power cables.

K2 Management acted as the owner’s engineer and TenneT TSO was awarded the contract to operate the transmission system.