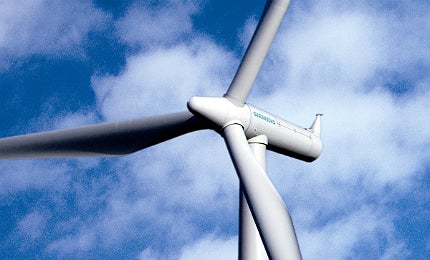 The project created approximately 900 temporary jobs and 125 full-time jobs. The wind farm will produce 235GWh of power, sufficient to provide electricity to 30,000 houses in New Zealand.

Mill Creek wind project was objected by local Ohariu Valley residents who lodged an appeal to Environment Court. In August 2011, the Environment Court approved the resource consents with a limit of 26 turbines as against the applied number of 31 turbines.

Mill Creek wind farm comprises o6 Siemens 2.3MW 82VS wind turbines. Each turbine is an IEC Class IA version of the classical SWT-2-3-93 turbine. It has a rotor diameter of 82.4m and hub height of 80m. The VS version is highly-suited for regions with high noise restrictions.

The B40 blades installed at the wind farm are built of fibre glass reinforced epoxy material.

The three-bladed rotor, attached with pitch regulation, helps in power output optimisation and control. The turbine controller is micro-processor based with self-diagnosing features.

Development of the Mill Creek wind farm was completed in four phases. The first phase involved creation of road access for transporting the heavy turbines to the wind farm site. A new road was constructed along with upgrading the public roads of Ohariu Valley.

The first phase also included construction of a five kilometre road from the Spicers Landfill on Broken Hill Road to Ohirua Valley.

The second phase involved construction of the internal access roads, and overhead and underground transmission lines for the supply of power to the national grid.

The final phase involved testing of the turbines for noise and performance before commissioning. The plant was declared commercially operational in September 2014.

Siemens was awarded the contract to manufacture, supply and commission 26 SWT-2-3-82 VS wind turbines for the Mill Creek project in 2009. Each turbine has a 2.3MW capacity.

The New Zealand Government aims to make its electricity sector carbon neutral by 2025. Wind power will play a major role towards achieving this target. Renewable energy sources will contribute up to 90% of the electricity supply by 2025, if the country achieves the carbon neutral power production target.

Wind farms could provide for 35% of the New Zealand’s electricity needs, but the potential of wind power is not fully utilised despite the country having good wind resources.

The Rotokawa II geothermal power station is located in the north-east of Taupo in New Zealand.

The US$40m expansion of the Mokai geothermal power plant to 100MW is complete.

Why digitalisation is the next big thing in clean energy transition

Auto-bidding and the future of energy storage

Maverick Creek is a 492MW wind farm located in Concho County, Texas, US. Inaugurated in April 2021, it is owned…