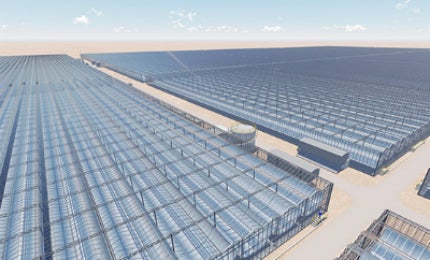 Translated as ‘mirror’ in Arabic, Miraah is a 1,021MW solar thermal facility located in South Oman, and is one of the world’s biggest solar plants.

Construction of the plant commenced in October 2015. First steam was produced in November 2017 and the plant was officially inaugurated in February 2018.

The thermal energy produced in the form of steam is used for thermal enhanced oil recovery (EOR) to extract heavy and viscous oil at the Amal oilfield. Touted to enhance well productivity by up to 300%, Thermal EOR uses high-pressure steam, which is injected into the oilfield reservoirs to make the oil easier to be pumped to the surface.

GlassPoint Solar was contracted to construct the new solar thermal plant by Petroleum Development Oman (PDO), a joint venture (JV) between the Government of Oman, Shell, Total and Partex.

The project builds from the success of the existing 7MW pilot plant at Amal that was commissioned in February 2013 and has an output of 50t of steam a day. The pilot plant complements the Miraah facility.

The mirrors are enclosed with a glasshouse, protecting them from wind, sand and dust storms. The glasshouse is further equipped with automatic washing facilities, which are capable of recycling the majority of the water used.

The innovative glasshouse enables the use of thin and lightweight components that significantly reduces material usage when compared with exposed solar thermal systems.

The mirrors are suspended from the glasshouse ceiling and controlled by small, inexpensive positioning systems and motors. The OTSG has a fully automated control system that enables remote operations from a computer and uses the same boiler tubes, sensors, pumps and controls used by gas-fired steam generators.

The project site covers an area of approximately 3km² (741 acres), of which the solar plant occupies less than 2km².

It is equipped with 36 glasshouse modules, constructed and commissioned successively in groups of four. Each glasshouse is capable of generating 85MmBTU/h (28MWt) of steam at peak capacity.

The glasshouse roof is approximately 6m above ground level, reducing the soiling rate by 50% compared to the use of typical exposed solar designs where the mirrors are placed around 1m above ground.

The facility generates approximately 6,000t of solar steam a day. The use of solar energy saves approximately 5.6 trillion British thermal units (BTUs) of natural gas a year, which is sufficient to provide residential electricity to approximately 209,000 people in Oman. It enables the country to redirect the gas saved from the project to meet the growing industrial demand and enable the country to offset 300,000t of carbon dioxide emissions a year.

The project also demonstrates the use of solar power for the oil industry on a commercial-scale.

The natural gas used for oil production in Oman currently accounts for more than 20% of the nation’s total gas consumption, more gas is used to aid oil production than for electricity generation.

Use of solar EOR technology could reduce gas consumed at the oilfield by up to 80%, redirecting the gas to the export market or for higher value uses, such as industrial development.

Selnikel is the most experienced company in Turkey in the...

The 900MW Borkum Riffgrund 3 offshore wind farm is proposed to be developed by Danish energy company Ørsted. The offshore…

The 496MW Bay of Saint Brieuc wind power project is located 16.3km off the coast of Saint-Brieuc Bay in Brittany…

Hornsea Project One is an offshore wind farm located off the Yorkshire coast, UK, within the Hornsea Zone in the…