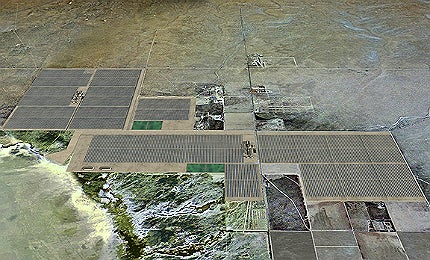 Abengoa Solar, through its subsidiary Mojave Solar, built, operates and maintains the plant. Construction of the project started in 2011 with commercial operations following in December 2014.

The facility generates enough power to serve 54,000 households and reduces 355,000t of CO2 emissions per year. It is designed for an operational life of 30 years and will produce 617,000MWh of power per year.

Pacific Gas & Electric (PG&E) will purchase the power generated from the solar thermal facility as part of a 25-year power purchase agreement (PPA) with Abengoa Solar.

The project will benefit the state economically and environmentally, supporting the state’s goal for clean energy. The estimated investment was $1.6bn.

The Mojave solar thermal facility is built across an area of 1,765 acres (714.2ha) of land, located approximately nine miles (14.5km) away from the Hinkley community, near Harper Dry Lake.

The site is divided into two parts (or power islands) of 125MW each, with an interconnection substation in the middle.

Located in the north-west, the Alpha site contains part of the solar assembly over 884 acres. The Beta site, located in the south-east, hosts the remaining solar mirrors in 800 acres.

Power generated from the two sites is transmitted to the central interconnecting substation.

“Abengoa Solar, through its subsidiary Mojave Solar, built, operates and maintains the plant.”

“The site is divided into two parts (or power islands) of 125MW each, with an interconnection substation in the middle.”

Parabolic mirrors are installed in parallel rows on the trough assemblies, in a north-south alignment. The mirrors store the solar radiation on a receiver tube.

The heat collection element receives the heat from the mirror assembly and uses it to raise the temperature of a fluid that is passed to solar steam generator heat exchangers. The steam emanating from these exchangers is fed to two steam turbine generators that produce electricity.

A wet cooling tower has also been built. It consists of a shell and tube heat exchanger that uses ground water to cool down the exhaust steam from the turbines to condensate. It uses approximately 2.65 million cubic metres of ground water a year.

In addition, administration and mirror assembly buildings have been constructed at the site. The assembling building is now being used as warehouse. In total, the project involved 185,000 square feet of new buildings.

Electricity generated by the plant is fed to the grid network of Southern California Edison (SCE). A new substation has been constructed at Lockhart to interconnect the MSP with the Coolwater-Kramer 220kV transmission line owned by SCE and and other substations in the region.

The Lockhart substation is located within the MSP site, spread across ten acres of land.

The interconnection with various substations of the region required approximately 100 miles (160.9km) of new fibre optical wires. These fall outside of the project area.

“Electricity generated by the plant is fed to the grid network of Southern California Edison (SCE).”

Abentey, a joint venture between Teyma International and Abener Energía, was awarded the engineering, procurement and construction (EPC) contract of the project.

Ram Jack Solar Solutions was contracted for the construction of foundations for the solar structures.
The US Department of Energy (DOE) approved a $1.2bn loan guarantee, which was issued through the loan programme office.