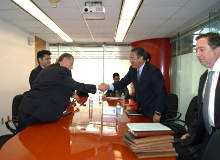 The 924MW Norte III combined cycle power plant, located approximately 30km south of the US-Mexico border in the municipality of Juárez, Chihuahua, will be the biggest combined cycle plant in Mexico upon completion.

The $1.55bn project was commissioned by Mexico’s Federal Electricity Commission (CFE) as part of the National Investment Plan 2014-2018 that was announced by the Mexican Government. Abengoa will own and operate the plant.

Construction of the project is scheduled to begin in May 2015 and will take 30 months to complete. The plant is expected to become operational in August 2017, while the commercial operation date (COD) is set for November 2017.

Construction of the project will enable decommissioning of units U1 and U2 of the oil-fired 316MW Samalayuca thermoelectric plant that is located approximately ten miles south of the project site.

The new plant is expected to create approximately 2,000 direct and indirect jobs and generate enough electricity to meet the annual demands of more than 500,000 homes in Juárez City. It also aims to reduce greenhouse gas emissions and lower electrical costs for consumers in the region.

The Norte III plant will be developed on approximately 29.4ha of land situated eight miles north of the town of Samalayuca. It will include a power station, water supply systems and access roads, as well as operational equipment, auxiliary systems and facilities.

Heat exiting from the gas turbines after the natural gas combustion process will be used to produce additional electricity. The otherwise lost heat will be routed to the HRSG for utilisation by the steam turbine to generate electricity and increase the efficiency of the electric generating unit.

The thermal load of the steam turbine’s exhaust will be dissipated by a dry cooling system using treated wastewater from the Laguna de Patos Wastewater Treatment Plant. An aqueduct six inches in diameter and 15.6km long will be built to transport water to the project site.

CFE will deliver natural gas to the plant through the proposed San Isidro-Samalayuca natural gas pipeline that will be located 2km south of the project site. A new 21.3m-long, 14in-diameter gas pipeline will be constructed within the site to receive the natural gas flow. The Norte III power plant is expected to consume 118.37 million cubic feet of natural gas a day.

Transmission of electricity from Norte III

Electricity generated at the Norte III plant will be fed to the existing CFE grid. It will be purchased by CFE under a 25-year power capacity commitment and purchase agreement (PPA).

“The $1.55bn project was commissioned by Mexico’s Federal Electricity Commission (CFE) as part of the National Investment Plan 2014-2018 that was announced by the Mexican Government.”

Toshiba was contracted to supply two sets of 175MW steam turbine and generators (STG) for the project in April 2015. The STGs will be delivered to the site from August 2016 onwards.

CFE signed a contract with Junta Municipal de Agua y Saneamiento (JMAS) for the supply of up to 17 litres per second of treated wastewater from the Laguna de Patos WWTP for the plant’s cooling system.