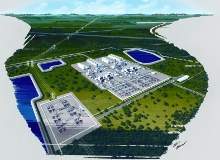 The 758MW combined-cycle power plant (CCPP) will be located adjacent to the Panda Temple I power plant at Synergy Industrial Park in the southern part of Temple, Texas.

The facility will create between 700 and 800 jobs during the construction phase and eight direct jobs when operational.

“Financing for Panda Temple II was secured in April 2013.”

Financing for Panda Temple II was secured in April 2013. The engineering procurement and construction (EPC) contract was also awarded in the same month.

Panda Power secured $372m of debt financing to build its Temple II power plant through Goldman Sachs and Credit Suisse. Ares Capital worked as the documentation agent for the financing.

A consortium of Bechtel and Siemens was awarded the contract to design and build the power plant, in April 2013. The same consortium is engaged for Panda Power’s other two projects in Texas.

Bechtel is responsible for the engineering and procurement for the balance of the plant, as well as the installation, construction and commissioning of the project.

Siemens will provide the power-island package for Panda Temple II, including the supply of gas and steam turbines and the waste heat recovery boilers. The order includes a long-term service agreement and is worth approximately $300m.

“The plant, with a gross installed capacity of 758MW, will serve approximately 750,000 homes in the central Texas area with clean fossil power.”

Panda’s second power plant in Temple will use advanced combustion turbine and emission-control technology. With a gross installed capacity of 758MW, the plant will serve approximately 750,000 homes in the central Texas area with clean fossil power. It will be supplied with natural gas from producers in Texas.

The new plant is located along the I-35 corridor, roughly midway between San Antonio and the Dallas-Fort Worth area. It is strategically positioned to serve the rapidly growing metropolitan areas in the region.

Panda Temple II will be a multi-shaft combined-cycle plant based on Siemens Flex-PlantTM 30 technology. The technology allows for fast and flexible operation. Power generation can begin within 10 minutes of start-up with significantly low emissions and fuel costs. The plant can generate the base-load power in just 60min.

Panda Temple project is a natural gas fired combined-cycle power plant being built in the city of Temple, Texas, US.

The hydrogen-cooled SGen6-1000A generators of the plant have an efficiency up to 99%.

Panda Temple II will be a power generating facility with ultra-low water usage. It will implement recycled effluent for cooling in order to help conserve the natural supply of drinking water.

The natural gas fuelled power plant will emit less than ten parts per million (ppm) of carbon monoxide and less than 2ppm of nitrogen oxide.