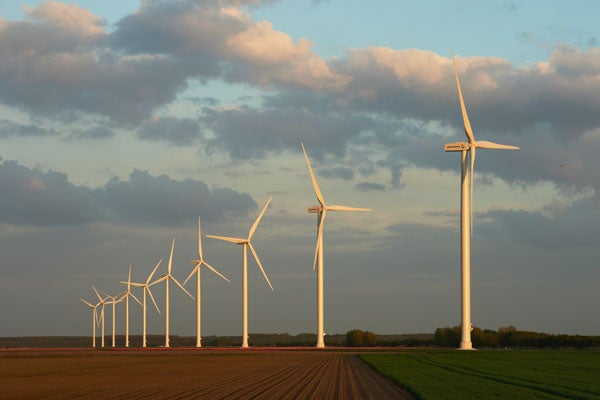 The Zuidlob wind farm is located at Zeewolde, Flevoland Province of Netherlands. It is one of the biggest wind farms onshore in Netherlands and officially became operational in September 2013. It was renamed as Princess Alexia Wind Farm during the farm inauguration.

The wind farm produces renewable energy that is sufficient for up to 88,000 homes. Vattenfall fully owns the facility through its subsidiary Nuon.

The construction of the Zuidlob wind farm was conceived in 1998 by 63 landowners. The project finally took shape in 2005 when the local authority, the provincial government and the landowners formed a group called Zuidlob.

"The construction of the Zuidlob wind farm was conceived in 1998 by 63 landowners."

Zuidlob made an agreement with Nuon for constructing the wind farm in 2008. Nuon purchased 100% stake in the project in October 2011 and agreed to pay fixed financial compensation to the land owning farmers for 20 years.

The wind farm is installed with 36 turbines of REpower 3.4M 104 model having a generation capacity of 3.4MW each.

The turbines are built of prefabricated steel and reinforced concrete segments. The rotor has a swept area of 8,495m² and the speed varies between 7.7rpm and 13.8rpm. The hub height of the turbine is 98m.

The power control of the turbine is through electrical blade angle adjustment using pitch and speed control principle.

Construction of the Zuidlob wind farm

The construction of Zuidlob wind farm was started at the end of 2011 and the entire project was completed within 17 months. Major construction works included the laying of three park roads of approximately five kilometres length, a crane installation site of 1,100m², and 36 concrete foundations for the turbines.

"The foundations required 1,727 piles and approximately 20,000 cubic metres of concrete."

The concrete foundations were laid at a height of 20ft and have a diameter of 15.5m. The foundations required 1,727 piles and approximately 20,000 cubic metres of concrete.

Demag AC120 and Liebherr’s cranes were used to erect the turbines.

Generation and transmission of power generated by the Zuidlob

The Zuidlob wind farm generated first electricity in December 2012 by connecting six of the 36 turbines to the grid, where as the remaining were connected in 2013.

The substation at Zuidlob comprises of power transformers, high and medium voltage switchgear, and automation equipment connecting the 33kV and 150kV networks. The turbines are connected to the substation through 33kV internal wind cabling park, which comprises of touch-proof elbow cable connectors.

The electricity from the 150kV substation is transmitted to the TenneT grid via export cables. The cables in the substation are connected using the 36kV cable terminations.

Financing of the Zuidlob wind farm

Zuidlob wind farm was developed with a total investment of SEK 1.4 billion ($218m). The project was chosen for funding under the SDE (stimulering duurzame energie) subsidy scheme aimed at promoting renewable energy, in December 2010. Vattenfall invested $202m for the development of the wind farm.

REpower was awarded the contract for supplying 36 wind turbines for the Zuidlob wind farm.

The grid connection contract was awarded to a consortium called Ventus Zeewolde. The consortium is formed by CG Holdings Belgium, SPIE Netherlands and Dura Vermeer Infra. It was responsible to design, engineer, deliver and integrate all the critical high voltage power equipment for the wind farm.

SPIE-Infra Energy was awarded the contract for supplying the cable connectors and cable terminations for the substation. It also helped in providing training for the cable preparation and connector installation.

The contract for the wind turbine erection works was awarded to Windhoist.

Dyckerhoff Basal was awarded the contract to provide concrete for the turbine foundations.

The Energy research Centre for the Netherlands (ECN), which develops knowledge and technology for the transition to sustainable energy management, has approved the ZephIR 300 wind lidar system for use as a stand-alone wind resource assessment.